Brennen Leigh & Noel McKay’s “Before The World Was Made”

Gone are the days of the legendary duet pairings in country music like George and Tammy, Loretta and Conway, right? Well they may not boast beehive doos or lamb chops, or grace the stage of the CMA Awards or come beaming into your home or buggy via the miracle of Clear Channel radio, but the Austin country scene’s power couple of Brennen Leigh and Noel McKay have revitalized the country duet concept album in a smart, brilliant, hilarious, and sweet offering called Before The World Was Made.

You’ll be sorely disappointed if you’re in the mood for sappy sonnets serenading the human love quotient. This is a love album for lovers who hate each other, and love each other all the same. It’s not that sentimentality doesn’t show its face here, but just like the real world, Before The World Was Made is not afraid to delve into the turbulence of love, to tickle the funny bone, and to tell it like it is. 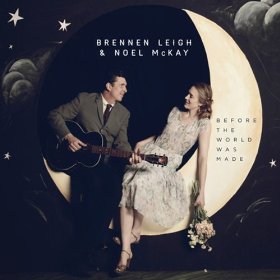 This album is the perfect soundtrack to an “it’s complicated” relationship status, with ingenious songs like “Breaking Up Is Easy,” “Breaking Up and Making Up Again,” “Be My Ball and Chain,” and “Let’s Don’t Get Married.” Yes, it sounds like a gloomy outlook, but underlying every song of this “on again, off again” album is a sweet love story that you can’t help believing mirrors Brennen Leigh’s and Noel McKay’s real-life narrative.

You can relate to their silly little squabbles and how they plot to resolve them with a positive ending. The way these songs work is both classic and fresh. Even walking in to Before The World Was Made with a deep appreciation for the songwriting chops of both parties, you are still perplexed at how Brennen and Noel wrote this entire album themselves, simply from the strength and the “instant classic” caliber of these songs.

Even the more straightforward love songs like “The Only Person In The Room” and “Salty Kisses In The Sand” are so fresh and clever, they fit right in to the cunning style of this record. “Let’s Go To Lubbock on Vacation” is downright side-splitting (sorry Lubbock readers), while still at its core being a nectarous little love story.

Before The World Was Made doesn’t let up for one moment, and it’s not just all about the words. The album is bolstered by tasteful, classic country arrangements, edified by producer extraordinaire Gurf Morlix. This is a neo-traditional country album at its heart, and the music offers tasty accompaniment to these high-caliber compositions.

Can’t say enough about Brennen, Noel, and Before The World Was Made. They may not be willing to commit to each other, but the music they make together is definitely a keeper.

Buy Before The World Was Made on Bandcamp.

Purchase Before The World Was Made on Amazon

Listen to album below.