“Bro-Country” Defined by the Cambridge Dictionary as a New Word 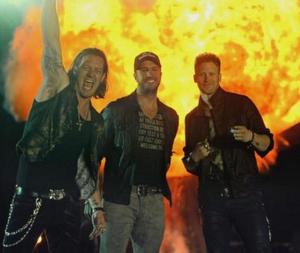 “Bro-Country”—the much-maligned sub-genre of country music that is defined most purely by acts such as Florida Georgia Line, Chase Rice, Cole Swindell, and a host of others, was recently featured on the Cambridge Dictionary’s “New Words” blog as a neologism, or newly-coined word. And it couldn’t come at a better time since many of Bro-Country’s most dedicated perpetrators profess ignorance at the word’s meaning, while others have mistakenly adopted it as a term of endearment.

In a February 2nd blog, Cambridge define Bro-Country as,

bro-country noun a sub-genre of country music sung by young white men, featuring songs with macho themes such as trucks, drinking, and partying

It was offered along with a few other new music-themed words, including filk noun – a genre of folk music that is inspired by science fiction, and raptivist noun informal – a rap artist who uses lyrics to try to create political change.

“Bro-Country” is not officially a word that can be added to the English language forevermore just yet though, and does not appear officially in Cambridge’s dictionary either online or in print. It has however passed the first hurdle, or at least has the Cambridge University Press paying attention.

According to the Cambridge Dictionary staff, a word is featured as a new word on their “New Word” blog if it has “…been observed recently in written or spoken English by one of our staff or a special team employed to monitor the language for such neologisms, or new words…The entries for these new words are not as fully-featured for example, there is no pronunciation or grammar information because it is difficult to give such information with accuracy as the words are still so new in the language.”

That means Bro-Country still has to pass some more tests before being fully adopted. In the meantime, what is a country music fan who might not be a fan of Bro-Country supposed to root for? Just because you don’t like something doesn’t mean the term describing it shouldn’t be considered a word. Then again, if the word “Bro-Country” is formally adopted, does this somehow give it more legitimacy?

Cambridge says, “We make no claims that these words will still be popular in a year’s time, nor do we approve or disapprove them we leave it up to you to vote with the thumbs-up and thumbs-down.” At the moment, the yeas and nays are neck and neck in the Cambridge Dictionary voting on Bro-Country.

This brings us to the dilemma of what the bros themselves think, and if they’d adopt the term even if it was made official, especially since they seem to have a language all their own. As Saving Country Music observed recently about Bro-Country kings Florida Georgia Line, and their command of the English language,

Brian Kelley and Tyler Hubbard have their own language, partial to the most grammatically-challenged and stupefying vocabulary lurking in the dankest sewers of the English dialect, but not residing firmly in any specific one of them so no truly proper translation can be obtained. It’s like Pig Latin for douchewads understood by them and them only. And only with the perfect deficiency of brain cells will their concoction of Ebonics, metrosexual douche speak, and stagnant gene pool rural jargon become anything resembling coherent to the human ear.

Writer Jody Rosen coined the phrase Bro-Country in a piece that appeared in the August 19th, 2013 issue of New York Magazine where he defined the term as being music from a ““tatted, gym-toned, party-hearty young American white dude.” The term caught fire from there, being featured in numerous segments on NPR, including one that interviewed Rosen about the phenomenon. Next thing you know, it was being adopted society wide…except by the very bros it admonishes.

But there’s a good chance Bro-Country won’t be around for long enough to enjoy full dictionary distinction and all of the rights and privileges thereof. The winds of change are blowing, and even though Bro-Country may still have some last gasp in successful singles or albums, the sub-genre’s fate seems all but sealed to be relegated to the trash bin of history as an ill-conceived hyper-trend. In full disclosure, Saving Country Music declared Bro-Country dead in September of 2014, and subsequently we’ve seen a downturn in the trend’s once dominant hold on mainstream country music.

Will defining Bro-Country formally give it undue legitimacy, or help chronicle it’s malfeasance on the country genre over the last few years? And if it isn’t formally recognized, will that prove just what a flash in the pan it really was? Saving Country Music’s stance has always been that the term was horrible, ripe for misunderstanding and to be co-opted by the bros themselves. A more distasteful sounding phrase like “laundry list” would have been more appropriate.

But whatever the final verdict is on Bro-Country as a word of the English language, we can almost guarantee the bros themselves with continue to remain completely and totally baffled by the entire discussion.