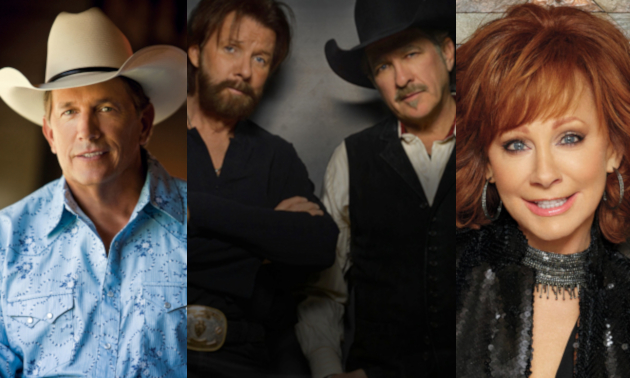 No, it’s not 1989, it’s 2019. But looking at the top of the Billboard Country Albums chart this week, you would have thought you’d been transported back 30 years in time. But it’s quite okay if you’re a traditional country music fan. No need to figure out how to generate the 1.21 gigawatts it takes to fire the flux capacitor and get you back to the present. You’re just fine with actual country music artists being at the top of the charts.

Granted this anomaly has some to do with three legendary country performers releasing their new records in a pretty short succession. But numbers don’t lie, and the truth is the untapped buying potential of country music’s traditional country fans has long gone undervalued. Sure all the kids love to stream Kane Brown on their iPhones, but have you seen the royalties a spin on Spotify generates? True country fans buy a CD or vinyl just to have it on their shelf. Hell they buy two of them, and stream the damn album when they’re flying down the interstate anyway.

This week Country Music Hall of Famers Brooks & Dunn, Reba McEntire, and George Strait come in at #1, #3, and #4 respectively on the Billboard Country Albums chart, and they’re #1, #2, #3 when you consider pure album sales. Brooks & Dunn get to #1 with their Reboot project where they teamed up with some of today’s country artists (some cool, some not) to reprise many of their biggest hits ahead of what many hope is a new original album in the works. Reba McEntire, who just released her well-received return to her country roots in Stronger Than The Truth comes in at #3, and George Strait, who last week was at #1, remains in the Top 5 with strong second week sales for Honky Tonk Time Machine which comes in at #4. Luke Combs disrupts the oldies party with his blockbuster This One’s For You released way back in June of 2017. It comes in at #2, and is #5 in pure album sales.

Brooks & Dunn sold 31,000 albums and equivalents to get their first #1 album in nearly a decade, and the 7th overall of their career. The numbers also give them enough to come in at #8 on the all-genre Billboard 200. Reba McEntire’s Stronger Than The Truth racked up 21,416 in sales for #3, and George Strait sold an additional 22,268 albums for a two week total of now of over 50,000 records of Honky Tonk Time Machine moved. Luke Combs—who also appears on Brooks & Dunn’s Reboot on a remake of “Brand New Man”—received credit for some 28,000 records sold as he continues to be on a Chris Stapleton-like tear.

This classic country party at the top of the albums chart probably won’t last long, but it’s just the latest sign that classic country and the artists that make it are starting to find significantly more traction compared to previous years when Bro Country reigned supreme. George Strait’s current radio single “Every Little Honky Tonk Bar” also remains strong on the charts, remaining at #18 this week.