Brothers That Bring The Roots 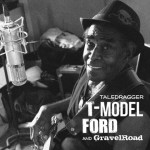 Today is the release of 90-year-old blues legend T-Model Ford’s latest album Taledragger, recorded with blues band GravelRoad. You can get from Amazon for only $5.99, and download the first track “Same Old Train” for FREE (Review from ninebullets.net).

Even though T Model is solidly blues, like so many other roots-based independent artists, he has turned to the same underground resources that many independent country acts use to get their music to the people. This has formed the big tent movement that can be seen in things like the Muddy Roots Festival lineup where you have country and blues musicians booked side by side, and nobody bats an eyelash.

And to be a master of the obvious, T-Model happens to be black. The topic of race has come up around here quite often, from the hubub over country rapper Colt Ford, to the talk of the two music super-genres (hip hop and country) that dominate the music culture and split right down racial lines.

Some call the blending of traditionally white and black music in the mainstream creative, and strain to find similarities in the histories of country and rap to fit flimsy premises that we’re all just brothers of different mothers and all music when broken down to origin is ostensibly the same. If someone can blend two unrelated genres of music in a tasteful manner that is still respectful to the roots, then more power to them. But I think people like Colt Ford and Jason Aldean do it because they find it financially lucrative. Yes, there are similarities in all genres, but instead of looking at genres or racial styles of music as something that needs to be destroyed to create harmony, or as a way to create mass appeal, I’d rather celebrate the diversity in music and keep the differences stark and pure to keep the musical spectrum healthy.

One of the things I am most proud of about the current underground country/roots insurgency is the diversity, with genres and sex, and race as well. There are African American artists that use the same music infrastructure, have the same managers, labels, etc. as the country bands we discuss here. This is just a few, but they illustrate the diversity that the broad roots insurgency boasts.

I also plan to highlight the few times when the mixing of country and rap has worked in the future.

They could be mistaken as just a black bluegrass band, but The Drops go back even farther to when the genres of American music were still forming. Jazz, blues, and old-time string music worked in concert with each other much more fluidly, and this is what makes The Drops music so appealing and authentic. Let’s not forget, the banjo originated in Africa. Their manager is Dolpf Ramseur, who also manages The Avett Brothers. They have a great album out called Genuine Negro Jig that’s a good one that I hope to have a review up for soon, but listen to them talk about the music and their approach–an authentic appreciation for the music that is uncompromising to the influences of industry-based image:

What REAL and neo-traditionalist country bands are doing for the roots of country music is what Black Joe Lewis is doing for the Blues/Jazz/Soul mix that was so great in the 60’s and 70’s, and has died a slow death at the hands of mainstream hip-hop. Black Joe is on Lost Highway Records, the same label as Hayes Carll and Ryan Bingham. When I saw him at South By Southwest last year, he played the same showcase as Th’ Legendary Shack Shakers and Slim Cessna’s Auto Club. Definitely worth checking out:

Booked by the Bucket City Agency that also books acts like The .357 String Band, Joe Buck, Rachel Brooke, and many more, and a performer at the Deep Blues Festivals that helped codify elements of the independent country movement and blend them with the  muddy blues resurgence, T Model Ford is an ancestor to us all. 90 years of hard living? Meh. Recent stroke? Meh. He’s still out there on the road kicking people’s asses on a nightly basis.