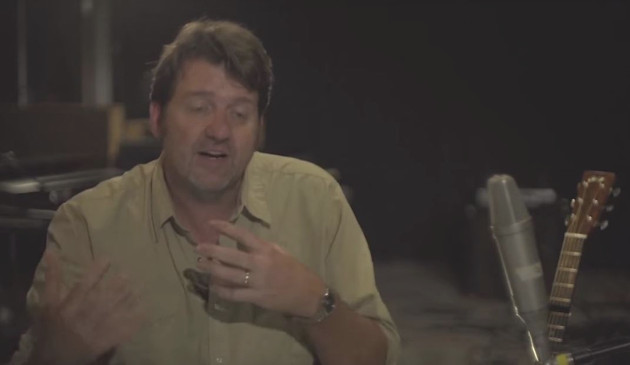 The music world is so wrapped up today in “album cycles” and what’s the next hot single that the craft of songwriting, the stories behind the songs, and the art of taking the time to record them with care and love has been lost. Texas country songwriter and performer Bruce Robison has been personally responsible for penning three #1 songs over his career, and now he’s launching a way to put the emphasis back on the song to encourage listeners to slow down, and delve deep into the magic that takes a song from inspiration to the finished track.

The Next Waltz, inspired by the legendary Martin Scorsese film The Last Waltz about The Band’s final show, is a multi-format series that takes both legends of country songwriting, and up-and-coming talent in the field, and showcases them in the intimate and organic setting of Bruce Robison’s analog studio at his house in Lockhart, TX. Participants in the series so far include Rodney Crowell, Jack Ingram, Turnpike Troubadours, Sam Outlaw, and the first episode features songwriting legend Jerry Jeff Walker.

“We’re focusing on great songs, and what it means to make music without the BS and the hype and the tricks,” says Robison, whose studio features all vintage, analog equipment, aside from the digital cameras set up to capture the moments in the studio. After each episode, videos, shorts, and singles will be released as part of the series. Along with debuting the video of Jerry Jeff Walker’s time in the studio (see below), The Next Waltz has also released a new single from Walker called “Song for the Life,” written by Rodney Crowell. It is a reprisal of a version Walker released many years ago. Alan Jackson also had a Top 10 hit with the song in 1995.

Along with the songwriters, The Next Waltz also features an all-star backing band. Warren Hood (the Waybacks, the BoDeans), drummer Conrad Choucroun (Bob Schneider, NRBQ), keyboardist Trevor Nealon (the Band of Heathens), pedal steel player Geoff Queen (Hayes Carll, Robison and Willis), bassist Dominic Fisher (Wood & Wire), guitarist David Grissom (the Dixie Chicks, Bob Dylan), and backing vocalist Kelley Mickwee (the Trishas) back up the songwriters during the sessions which take a laid-back feel, far away from the ticking time clock most artists are saddled by in the recording environment.

“I knew I wanted to record in this old fashioned way, that that was going to be the way to capture this music,” says Robison. “It’s real simple how we do it in here, which is pre-Beatles, where people used to be on the road, and they’d just take their new song into a real simple recording studio or a radio station, and they would just put the song down. And it would just be the sound of the band in a room.”