Kelsea Ballerini topping the country airplay charts is no victory for country’s women. Not because Kelsea isn’t female, but because she’s not country. A pop song gracing the top of the charts is a false positive, and only creates a new set of problems for the genre. Same goes for Lauren Alaina scoring a backdoor #1 recently by appearing on Kane Brown’s godawful “What Ifs.”

But Carly Pearce gives one true hope for the future of women on country radio as her debut single “Every Little Thing” hits #1 on the radio charts this week. It’s the first debut #1 by a solo woman since Kelsea Ballerini’s “Love Me Like You Mean It” from July of 2015. Before then, you had to go all the way back to Carrie Underwood’s “Jesus, Take the Wheel” from 2006 to find another female debut #1.

There are a few healthy caveats with this distinction for Carly of course. “Every Little Thing” is still way more pop than country, thanks to producer busbee. Yet the country texturing is present instead of omitted, and it’s a dark song about heartache, which is as rare these days in the mainstream as a woman on the country radio charts. The song was also helped well along by iHeartMedia’s “On The Verge” program, which gave the song a shot of early adrenaline. Yet most experts feel it made it to #1 mostly under its own volition. 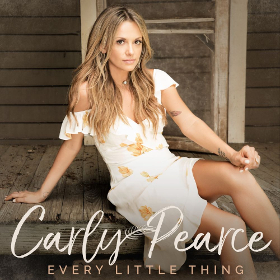 At least Carly Pearce has a solid country background, coming up through the ranks playing bluegrass at Dolly Parton’s Pigeon Forge as opposed to being a manufactured pop star proffered up by the industry as its next tokenistic female. Often radio is about ingratiating yourself to the powers that be, and proving to them that if given a chance, you can succeed. “Every Little Thing” hitting #1 gives not only that open door to more quality songs from Carly such as her stellar “If My Name Was Whiskey,” any woman gracing the charts with a song of substance gives a glimmer of hope to the format.

Same goes for independent artists, and the success Aaron Watson continues to have with his song “Outta Style.” It continues to rewrite conventional wisdom about country radio, sitting now at #17 on the charts, which was unthinkable from a truly independent artist in previous years. As much as this is about Aaron Watson getting his name out there, it’s also about stretching the limits of what could be capable from any independent artist in the future. You have to ask frankly, is all the effort to get Watson this high and maintain him there worth it? It very well might be in the long run, for Watson, and for independent country.

Just like with Carly Pearce’s “Every Little Thing,” Aaron Watson’s “Outta Style” is less than ideal as the song to find such traction and success on country radio. But again, it could be a good means to an end. That is what we’re seeing transpire for Jon Pardi, who after seeing a few mild singles hit #1, has been given the radio green light on arguably his most traditional and best song yet, “She Ain’t In It.” After Pardi won New Artist of the Year at the 2017 CMA Awards, the song continues its quick gains on the charts, going from #44 to #38 this week.

Both Carly Pearce and Aaron Watson were named this week as featured artists for CRS 2018’s New Faces of Country—an important distinction that helps an artist solidify their relationship with country radio.

In other chart news, Miranda Lambert’s “Tin Man” continues to meander at #26, dropping a spot this week, and probably getting ready to be replaced by a new single soon. Chris Stapleton’s “Broken Halos” sits at #30, and also is in no man’s land with a new album nearing release, and no real radio strategy seeming to materialize. Lambert’s The Weight of These Wings, and Stapleton’s From A Room: Vol 1 saw the greatest gains on the Country Albums charts after big moments at the CMA Awards. Lambert went from #38 to #16, and Stapleton from #11 to #5.