Chances Are You Won’t Even Listen to Those Vinyl Records

Today (4-16) is the vaunted “Record Store Day” where active and conscientious participants in the independent music economy are venturing out to their local record stores to give an extra stimulus to commerce by buying limited-run special releases and other goodies at their local establishments.

Though Record Store Day has its critics, it’s hard to not say it’s helped the huge resurgence in vinyl records over the last few years, which has delivered needed support behind local establishments that are not only able to retain their presence in local communities, but in some cases are now even expanding. Some of the growing pains of recent years for Record Store Day, where the lack of vinyl manufacturers was squeezing out many of the small-time artists and labels that the music holiday was meant to help as well, have been wrinkled out due to dozens of new presses coming on line, and streamlining of supply chains.

Read (from the archive) – Broken Record: Why Record Store Day Is Not Working

Furthermore, purchasing vinyl has arguably never been more helpful to the folks on the cool side of the music economy. Recent studies have proven that vinyl sales account for more revenue for the biz and artists than all the free streaming combined. Though some thought vinyl was a fad, it’s slice of the music pie continues to grow. And all of a sudden, what looked like a dying music concept—the local record store—is finding new life, and offering both physical product, and other important functions like meetup locations and in-store performances for local communities.

This is all well and great, but a recent study by ICM Unlimited says that many of the people who purchase vinyl records actually have no intention of ever listening to them. Some of these consumers never use their turntables, and some don’t even have turntables at all. It’s more about simply owning the physical product, supporting their favorite artists, or perhaps even an element of fashion to own vinyl that’s driving the market.

The ICM Unlimited study found that out of the people who purchase vinyl, 41% have a turntable, but don’t use it. 7% of vinyl buyers don’t even have a turntable. And 15% of vinyl purchasers say they buy the records fully intending not to listen to them (and even more apparently don’t). Also, 45% of vinyl buyers say they stream the album before buying on vinyl, so even though vinyl is coming back, streaming still plays a role in the process.

Here’s the helpful infographic that’s being passed around. 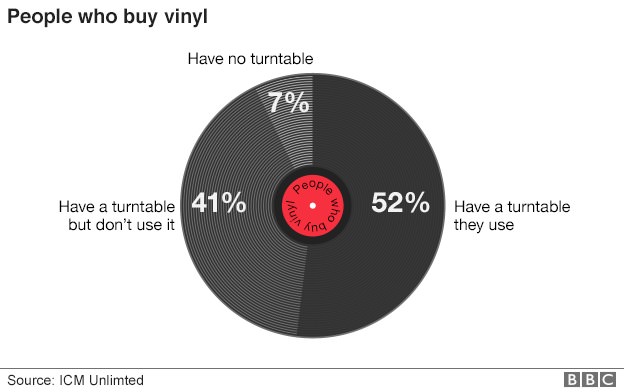 Something else ICM Unlimited found was that vinyl purchasers are not as chintzy as other music listeners.

The study also found demand for vinyl is still growing, and that even cassettes are making a comeback in the physical music resurgence.

All of this is good and welcomed news for the independent music economy, but hey, why not also show some love to those vinyl records by actually listening to them. Purchasing vinyl records and knowing your doing your part to help support the local music economy is only part of the fun. The true payoff is putting a vinyl record on, slowing down, and basking a high-hi listening experience with your favorite music. Besides, if folks aren’t actually listen to the records, how long is the vinyl trend going to last?