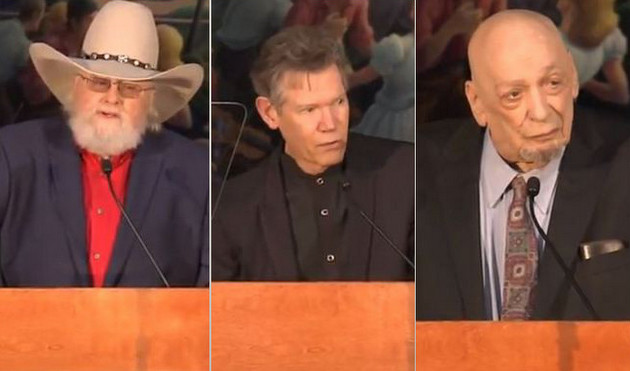 Tuesday morning (3-29) found country music dignitaries and CMA executives gathered in the rotunda of the Country Music Hall of Fame in Nashville to announce the newest members to the storied institution. The event was hosted by the fiery Brenda Lee.

The 2016 Country Music Hall of Fame inductees were:

— DJ and label executive Fred Foster in the Non-Performer category.

The first announced inductee was DJ and label executive Fred Foster in the Non-Performer category.

“You don’t dream about things like this,” Foster said in his acceptance speech. “If you’re involved in country music in any way, and you’re inducted into the Hall of Fame, you can’t get any higher, or any better than that. You’re at the top of the mountain. And I have to say the view is very good from up here.”

Fred Foster is known for numerous contributions to country music, most notably starting Monument Records in 1958, and helping to launch the careers of artists such as Roy Orbison, Dolly Parton, Kris Kristofferson, Tony Joe White, Billy Joe Shaver, and many others. He also worked as a producer.

“Country music is the real deal,” Foster said. “The rest of it, some of it’s good, and some isn’t. But country music has been my life.”

Fred Foster also spilled the beans on what was supposed to be a surprise by announcing that Charlie Daniels and Randy Travis were also set to be honored as new inductees.

Next up was fiddle -playing maestro and Southern rocker Charlie Daniels as the new Veteran Era inductee.

“I’m flabbergasted, I really am,” said Charlie. “This is the one you don’t even dare dream about. You can work toward other goals. There’s no way to work toward this goal. It’s something that either happens or it don’t. And I can’t think of a bigger honor to be given to anybody who loves country music. This is the cherry on top of the icing … I’m very humbled this morning to think about the shoulders that I stand on; the artists who blazed a trail down millions of miles of two lane black top to take this music to the people who loved it: the common man.”

The Hall of Fame rotunda became emotional when Modern Era inductee Randy Travis walked under his own control to the podium. Though he struggled to speak, Randy said simply, “Thank you,” which were the first words he’s spoken in public since suffering a major stroke in 2013. His wife Mary Davis Travis then read a speech on Randy’s behalf.

“I’ve been asked to take on the daunting task to be the voice of this man who so eloquently put words to melody to make beautiful music for the world to enjoy who lived and he loved the songs that he wrote, and the songs that he sang,” said Mary Davis. “He’s a man of great courage as you all know. He’s kind, he’s gentle…”

You can watch the entire press conference below, starting at roughly the 18:00-minute mark.