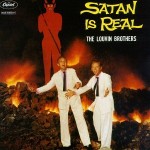 83-year-old Charlie Louvin, suffering from pancreatic cancer, is heading out on the road to celebrate the 50th Anniversary of The Louvin Brothers release of the landmark album Satan Is Real. Charlie, Country Music Hall of Famer and member of the Grand Ole Opry for 55 years, is showing no signs of slowing down. And as first reported here, when he leaves on the road, he will not be playing the usual venues Hall of Famer’s play, but establishments usually reserved for underground country artists and rock bands.

For example his show in Nashville will not be at the typical haunts for country legends like The Opry or The Loveless Cafe. He will be playing in east Nashville, at Foobar Too, a spot frequented by acts like Wayne “The Train” Hancock and Joe Buck.

There’s also a benefit concert scheduled to help with Charlie’s mounting medical bills that will be happening south of Nashville at the Bell Buckle Banquet Hall on Oct. 30th.

The Louvin Brothers’ Satan Is Real album was especially known for its interesting cover, which was taken in a rock quarry, with a 12 foot plywood rendition of Satan in the background and burning tires hidden under rocks creating the flames of Hell. The song was later used by Hank III in a medley to open his album Straight To Hell.

You can find Charlie’s tour dates below, as well as on the Saving Country Music Calendar, where all important REAL country concert dates can be found.