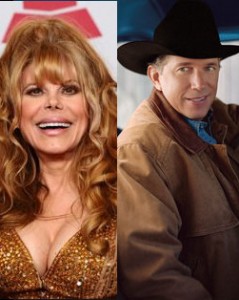 Brad Paisley and LL Cool J have the music world buzzing with their new country rap “Accidental Racist.” The anti-racism song from Paisley’s new Wheelhouse album released just this week has sparked controversy in some circles from its racially-charged themes. But not to be outdone, Saving Country Music has learned that another superstar duo is planning their own culture-blending song to capitalize off of the “Accidental Racist” publicity. Country’s King George Strait, and world-renown Spanish actress, singer, and flamenco guitar player Charo have teamed up to tackle the immigration issue in a new song reportedly to be called “Incidental Isolationist.”

Forget that Charo is from Spain and not Mexico, and that George Strait’s voting record is not a matter of public record, the two will comprise the roles of an illegal Mexican immigrant and a Republican-voting Texan for the sake of the song’s message of outreach across the border.

“George and Charo really want to stimulate a dialogue and tackle the complexities of the immigration issue,” George Strait spokeswoman Amanda Frankenfurter told Saving Country Music. “True artistry is often provocative and uncomfortable, but we feel confident it will result in a more open understanding of the perspectives on both sides.”

Though the final version of the song has yet to be consummated, Saving Country Music was supplied with some lyrics that apparently made the final cut.

To the man that cuts my lawn in the white flight suburbs, I hope you understand
That when I wore my Mitt Romney for Pres shirt, the only thing I mean to say was that I’m a Republican.
The ‘R’ in front of my name on my voter card is like the elephant in the corner of Texas
And I just walked him over the border checkpoint
Just a proud Texas son with an ol’ can of Lone Star
Lookin’ like I got a lot to learn, but from my point of view…
I’m just a Texas man, comin’ to you from across the Rio Grande
Tryin’ to understand what it’s like not to be
I remember the Alamo, and you remember San Jacinto
But it’s not like you and me can rewrite history

Dear Mr. Texan, I wish you understood
Just because my maracas are shakin’ doesn’t mean I’m up to no good.
You should try and dance the Samba, I really wish you would
I promise my ginormous breasts are real, but I’m still misunderstood.
I wasn’t there when Santa Ana slaughtered the men at the Alamo
But us Mexicans have given you the gift of tacos, burritos, and Gazpacho
Feel like drinking a cold grape Faygo, and avoiding the whole Arizona neighborhood.
Because when a police officer asks me for my immigration papers, I’m thinking it’s not all good.
(Charo’s plastic surgeon could not be reached for comment)
© 2021 Saving Country Music
0