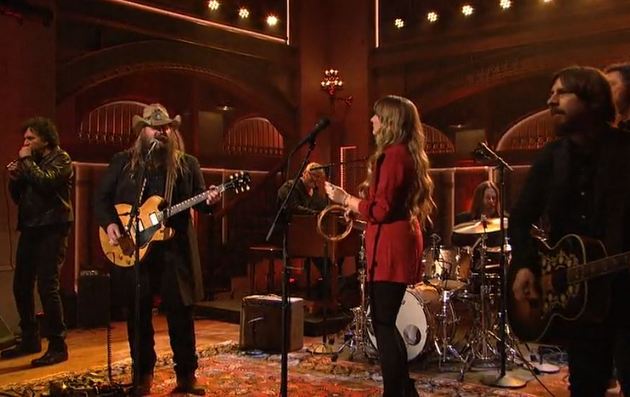 Chris Stapleton took the Saturday Night Live stage on January 16th in front of an All-Star band, furthering the off-the-charts momentum the songwriter has been riding since sweeping the three awards he was nominated for at the 2015 CMA Awards, including Male Vocalist of the Year, and Album of the Year. Since early November, Stapleton has been dominating Billboard‘s Country Albums charts, and Saturday night’s performance only promises to keep him the most dominant force in country music for weeks to come. At his current sales pace, Stapleton is on track to have the best-selling album in all of country music in the last 18 months or longer, and he’s doing it all without the benefit of significant radio play.

Speaking of radio play, Stapleton performing “Parachute” on SNL is probably a good indication this could be the next single off of his blockbuster album Traveller. His current single “Nobody To Blame” was the second song Stapleton performed. Notables joining Stapleton on stage were producer Dave Cobb on acoustic guitar, Robby Turner on keys and steel guitar, and his wife Morgane on backup vocals.

The next big event for Stapleton will be the 58th Annual Grammy awards happening Monday, February 15th, where the Kentucky native will be up for numerous awards, including Album of the Year. Recently, Pandora predicted the Grammy winners by pulling the overall number of spins for the track in the last year, and comparing that to the number of “thumbs up.” By their calculations, they expect Chris Stapleton to take the night’s top prize. Certainly all of the momentum Stapleton has accrued over the last few months can’t hurt his prospects.