Chris Stapleton to Perform with Justin Timberlake on the CMA Awards. But That’s Just The Beginning. 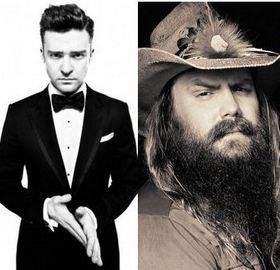 Well well well. In yet another bid for you to firmly affix your eyeballs to the boob tube on Wednesday, November 4th for the 49th annual CMA Awards, it has been announced that critic’s favorite and thrice-nominated SteelDriver turned songwriter turned performer Chris Stapleton will be performing with former ‘N Sync member turned solo superstar Justin Timberlake.

***UPDATE: Stapleton has told Cody Allan that the pair will perform Timberlake’s “Drink You Away” and Stapleton’s “Tennessee Whiskey” written by Dean Dillon and originally recorded by David Allan Coe.

The announcement was made on Good Morning America Monday (11/2) morning, though if you’ve been reading Saving Country Music, you probably already knew this. Justin Timberlake actually foreshadowed this moment back on December 10th, 2014 when he tweeted out . . .

Chris Stapleton told Rolling Stone about the collaboration, “We’ve always talked about finding a reason to do something together, [Timberlake] is obviously one of the greatest musical talents in the world, maybe ever, that we have. I called him up with no thought of him agreeing to it, and he was ready to start planning it right then. I said, ‘Well, I think maybe we should wait, and if we get nominated they’ll let me have [a slot].’ He was so gracious and kind to want to do it and was so excited about it, and I’m excited about it. It’ll be something I’ve never done before for sure.”

But the collaboration may only be a footnote in the grand scheme. The announcement comes at a time you’d have to be deaf and blind to not notice that Justin Timberlake is poised to make a country move. Not only as Timberlake said on numerous occasions he’d like to make a country record, on June 1st, Timberlake purchased a 126-acre parcel for $4 million in philanthropist Aubry Preston’s Lieper’s Fork community preserve just south and east of Nashville. Aubrey Preston is the millionaire who saved historic Studio ‘A’ on Music Row in Nashville from last-minute demolition in late 2014. Alan Jackson, Trisha Yearwood, and Tim McGraw are other country performers living in the Lieper’s Fork / Williamson County area, and Timberlake’s mother and stepfather live in Brentwood, just south of Nashville.

In November of 2013, Timberlake told Sirius XM’s The Highway: “I just did an interview earlier today and I said, ‘I’m America, that’s what I am.’ In all sense of the word. [I] grew up outside of Memphis, Tennessee. Listened to country music, R&B music, classic rock, you know, everything ”¦ I still got my eyes set on a Best Country Album. There is time for that.”

Then in December of 2013, Timberlake doubled down on his statements, telling The Tennessean:

“The next move for me is to sink some teeth in here [Nashville]. I’ve done it before. I got a taste of it,” (referring to the song “The Only Promise That Remains” that Timberlake wrote and produced for Reba McEntire) “”¦it reminded me of the songs that my grandfather used to make me listen to when I was a kid in a great way. It hit me, ‘Oh I wrote this song because of my childhood.’ It ended up being this thing that country radio wouldn’t play.”

“A good song is a good song is a good song,” Timberlake continued. “There’s still so much that can happen in Nashville, and I look to the future and I want to be a part of it. And I’m not just blowing smoke. I don’t say that about Los Angeles. I don’t think I would move to Nashville. I know I would move to Nashville. It’s a matter of time. And it’s what this place could offer me, to be that outlet for all these different styles.”

The Stapleton / Timberlake collaboration is one of numerous collaborations already announced by the CMA’s. The show will start off with Hank Williams Jr. singing with Eric Church in a new rendition of “Are You Ready For The Country?” originally written by Neil Young. Then Thomas Rhett and Fall Out Boy will give viewers and opportunity to take a leak or refresh their beverage when they take the stage together.

But the 2015 CMA Awards could eventually be known as the spring board for Justin Timberlake’s country move, and a big moment in country music. Whether that moment will be considered good or bad in the annals of country music history remains to be seen.