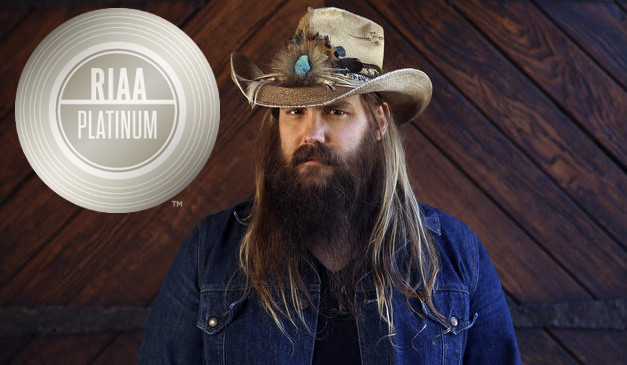 Add yet another distinction to Chris Stapleton’s now historic run with his debut album Traveller.

Under the radar and with little fanfare, Traveller was officially certified 2x multi-platinum by the Recording Industry Association of America, or RIAA on September 27th for having shipped 2 million equivalent units. Released all the way back on May 5th, 2015, Traveller continues to consistently sell over 10,000 units weekly and stays in the Top 5 on the Country Albums charts despite relatively no radio play and no major promotional push. It’s all due to the organic momentum behind Stapleton that was sparked off at the 2015 CMA Awards in early November when Stapleton shocked the country music industry by winning multiple awards, and performed a duet of the classic country song “Tennessee Whiskey” with friend Justin Timberlake.

But we’re now getting close to a 1 year anniversary of the 2015 CMA Awards, and still Traveller‘s sales are similar to an album released mere weeks ago. Going double platinum puts Stapleton in a very exclusive crowd in not just country, but in music in general in an era when album sales by any artist are hard to come by. And all of this sets the table for the 2016 CMA Awards now a month away where voters will be considering Stapleton for Entertainer of the Year. Who knows what could happen with Traveller if Stapleton has yet another big night.

Traveller was certified both Gold and Platinum on February 26th, 2016, while his rendition of “Tennessee Whiskey” also enjoys Platinum status. Traveller also received five separate award distinctions, including Album of the Year by both the CMA’s and ACM’s, and a Grammy for Best Country Album. He was also just named Artist of the Year at the 2016 Americana Music Awards.