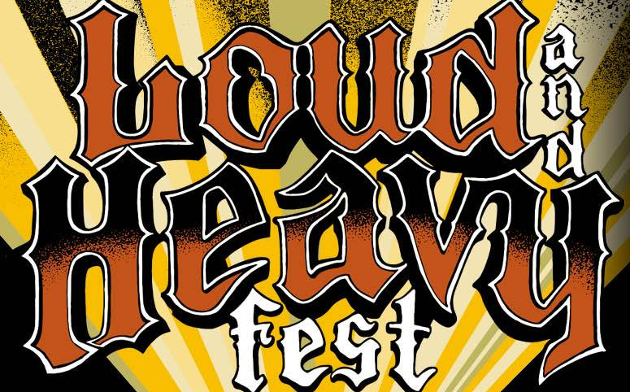 “Loud and Heavy” –  One of the signature songs from Cody Jinks, first featured on his 2015 record ‘The Adobe Sessions.’

The inaugural Loud and Heavy Fest curated by Cody Jinks is about to be unleashed on Ft. Worth, Texas this Saturday, August 18th, and they’ve released the lineup and time schedule for the event. Loud and Heavy Fest will be held at the Panther Island Pavilion, which is positioned in the heart of Ft. Worth, right on the banks of the Trinity River, with the city skyline flanking it in the back.

Ward Davis is a singer, songwriter, and performer who wrote the title track for Cody Jinks’ 2016 record I’m Not The Devil, co-wrote “Colorado” for Cody’s latest record Lifers, and had Willie Nelson and Merle Haggard recorded his song “Unfair Weather Friend” for their duet record from 2015. Ward Davis was also able to rope Willie Nelson and Jamey Johnson to guest on a track from his debut record 15 Years in a 10 Year town from 2015. He’s a frequent tour partner of Cody Jinks.

A Nashville survivor who was once signed to Big Machine Records right beside Taylor Swift, she’s now returned to her home state of Texas to be a part of the resurgent country movement. Both a great singer and songwriter, her 2017 track “Bottle By My Bed” from the album Trophy won Saving Country Music’s Song of the Year.

Austin,TX-based old school country music crooner in the vein of Johnny Cash, he’s part preacher, part honky tonk hero. Cauthen just released a new EP called Have Mercy, and will be coming off a West Coast road trip where he unfortunately had his van and trailer stolen in Sacramento, California. Van was recovered. Much stolen gear is still missing.

The young man who sounds like he’s in his sixties is gearing up for the release of his second full-length record Songs of The Plains on October 12th via Thirty Tigers. Originally from the small town of Swift Current, Saskatchewan, the 23-year-old has been compelling audiences since the release of his EP Imaginary Appalachia in 2015. He’s built a strong following across country, folk, and roots circuits through his gripping original songs and stellar takes on traditional tunes sung with a one-in-a-million voice.

The Flint, Michigan native who now calls interior California his home helped pave the way for many of the independent country artists we enjoy today. At one point Cody Jinks was opening for him before Cody blew up. Now to many, Cody and Whitey are 1 and 1A of modern American country music. His next album Hard Times and White Lines is due October 26th.

Heavy metal band from Austin, TX who started out as mostly a doom metal project, but recently has been classified more as hard rock or stoner rock. They’ve toured with bands such as Metallica and Lamb of God in the past, but hailing from Austin and filling bills with bands such as Clutch who also have a following in the roots world, The Sword fits well into the “Loud and Heavy” Cody Jinks festival concept.

A long-time touring metal band out of Raleigh, North Carolina that started in hardcore punk, guitarist Woody Weatherman has been going at it since 1982. Signed to Columbia Records in the 90’s, like The Sword, they have some ties to country and roots. Warren Haynes of The Allman Brothers fame once collaborated with the band, and they’ve featured steel guitar in their music before and been label as “southern metal” in the past. But don’t mistake it it, Corrosion of Conformity is a loud and heavy metal band, evidenced by their new 2018 album No Cross No Crown.

The King and chief curator of Loud and Heavy Fest, Cody Jinks hopes to make this the annual gathering for his devoted followers known as “Flockers.” A former player in a metal band himself who it’s not uncommon to see sporting a Metallica T-shirt on stage, he’s now brought the “Loud and Heavy” concept to hard country music. Cody’s just-released album Lifers shook up the country music charts, coming in at #2 in country, #1 in Americana, and #5 in all of music. 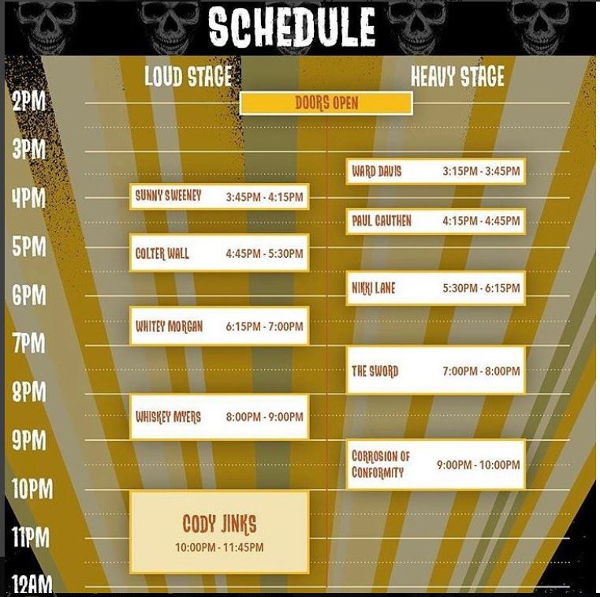