Trigger Down with Pop Country 127 Comments 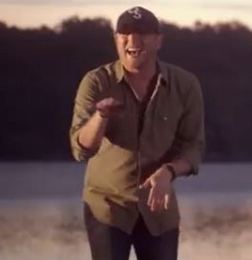 You knew with the huge success of Florida Georgia Line that doppelgangers of the pop country duo would be coming down the pike. Well ladies and gentlemen, welcome to country music Cole Swindell; not even 9 months into his record deal, and he already has a #1 hit.

Cole Swindell is the most not-having-any-bit-of-soul-or-culture human being I think I have ever observed on God’s whole creation. He’s the human equivalent of a piece of bleached white bread with the crust cut off, served with a glass of room temperature tap water. He’s more milk toast than Caspar, and more boring than a bowl of vanilla. It’s like a thermonuclear holocaust of culture and personality-scrubbing destruction swept over Cole Swindell while he was swimming in the very fissile material of the root detonation agent, leaving a man that is so vacant of anything interesting or distinguishable that he is the utmost purified and scientifically-verifiable essence of Miriam Webster’s unabridged definition of “generic” that could ever be procured as an example or proffered as evidence.

Whereas a lot of country music artists pay their dues sweating it out in honky tonks and clawing their way up the circuit, Cole Swindell got his start schlepping pop country panties for Luke Bryan. No, I’m not kidding. Swindell’s initial claim to fame was as a Luke Bryan merch peddler, landing the job because the two were Sigma Chi frat buddies at Georgia Southern. Swindell’s gone from trying to upsell you the T-shirt with Luke Bryan’s name highlighted in glittertext, to sharing the stage with his Georgia Southern buddy, tag teaming the unclean masses in impersonal stadium shows with ultra-slick, overproduced, and abominably-average lite rock drecky schlock.

“Chillin’ It”, just like Cole Swindell himself, is the refined, filtered, and homogenized version of something that was rapaciously trite and disappointing to being with. The first thing that pops in your head when hearing “Chillin’ It” is that it’s pretty blatantly Florida Georgia Line’s “Cruise” version 2.0. Except somehow, inexplicably, Swindell discovered how to do them even one worse by engineering something so aggressively vapid that labeling the song ‘bad’ even seems to bestow this spiritless, prosaic waste of effort with more personality and distinction than it actually contains or deserves. Even the pop country pom pom waver Billy Dukes of Taste of Country called “Chillin’ It” the “decaf version” of “Cruise”.

Of course, calling this song “Cruise Lite” makes even more sense when you look behind-the-scenes and see how Swindell was one of the co-writers on Florida Georgia Line’s song “That’s How We Roll” with Luke Bryan. “Chillin’ It” was cut in a studio with producer Jody Stevens playing every single piece of the music and Swindell singing. Next thing you know Swindell is being signed by Warner Bros. in the wake of the historic success of Florida Georgia Line in 2013, as everyone on Music Row is looking for their version of Scott Borchetta’s new pop country boy toy.

The video for “Chillin’ It” rises to the occasion of offering a fair visual representation of Swindell’s unparalleled mining of mediocrity. Beyond featuring the obvious elements of a pretty girl and classic trucks out in the country, the “Chillin’ It” video makes poor use of ‘B’ roll-quality footage taken with the sun obnoxiously hitting the camera lens. Cole Swindell is featured hanging out by a lake, white boy hip hop dancing with awkward and embarrassing gesticulations that make him look more ridiculous than your drunk and racist uncle when he’s mocking black people he sees on TV.

The whole vibe of the songs seems to be Cole trying up make up for the fact that he’s an uncultured, pasty white boy on the outside looking in of what is cool with his stupid, Ebonics-laden lyrics that go absolutely nowhere, and one of the most limp dick lyrical payoffs at the resolution of the chorus I think I’ve ever heard.

We don’t need another Florida Georgia Line Cole; one was already too much.