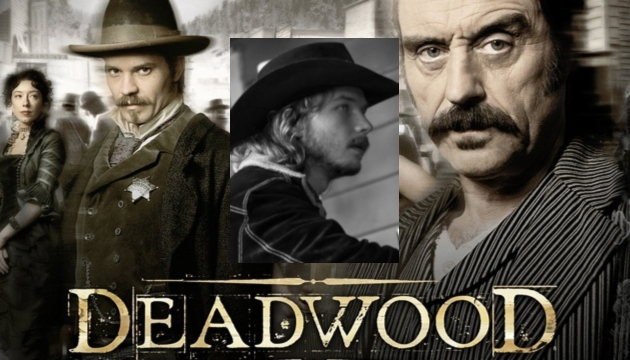 If you weren’t already frothing with anticipation for the return of HBO’s Western Series Deadwood in movie form, they’ve figured out how to suck you in even further by activating your country music bone. In the new, official trailer for Deadwood: The Movie, the unmistakable voice of Canadian songwriter and Western tale spinner Colter Wall comes wafting underneath the scenes of drama, deceit, and murder that the Deadwood franchise is famous for. The lonesome plucks from an acoustic guitar followed by the ominous foot falls and hand claps of Colter Wall’s “Sleeping on the Blacktop” make it just about the perfect song to set the mood for the Deadwood relaunch.

“Got this news today while tagging a couple new calves,” Colter Wall said. “‘Deadwood’ was and still is my favourite show/series I’ve ever watched. The writing was always so brilliant, as was the acting. I couldn’t be happier about having one of my tunes in the trailer for the upcoming movie! Thanks HBO. This day just keeps getting better!”

The producers of Deadwood aren’t being entirely original with the pick though. “Sleeping on the Blacktop” was also selected for the soundtrack and trailer for the 2016 modern Western film Hell or High Water, which went on to be nominated for Best Picture at the Academy Awards. The same distinction was awarded to the 2017 dark comedy Three Billboards Outside Ebbing, Missouri that also included “Sleeping on the Blacktop” in the official movie trailer.

Colter Wall is the hot hand when looking to set the mood for your film, and it can only help the young man’s name recognition. Just like many independent country and Western artists, Colter Wall doesn’t enjoy the benefit of mainstream radio play or industry awards, and must find alternative avenues to get his music to audiences. From the exposure “Sleeping on the Blacktop” has received already, the song has racked up nearly 15 million streams on Spotify alone, and over 5 million combined views on YouTube. “Sleeping on the Blacktop” comes from Colter Wall’s 2015 debut EP Imaginary Appalachia. Originally from Saskatchewan, Colter has engaged audiences with his one-of-a-kind-voice, and primitive style of folk and Western songwriting.

13 years after the Emmy-winning series ceased production, HBO Films decided to bring the Deadwood franchise back to life, including reuniting most of the original cast to reprise the story 10 years after the moment the series left off. Deadwood: The Movie re-emerges around the declaration of Statehood for South Dakota, and finds the characters reigniting old rivalries while forging new alliances, and trying to navigate the march of modernity, all while employing the salty language the series is known for.

Deadwood ran for three seasons and 36 episodes, and received a whopping 28 Emmy nominations, winning 8 over its run. The discontinuation of the series came as a shock to fans, and it’s considered one of the greatest television franchises ended too early. Original creator David Milch is once again on board, and wrote the movie. It is being directed by Daniel Minahan, know for working on the HBO series Game of Thrones. Production started in late October 2018 in California, and the film received a $4.2 million California Film & TV state tax credit.

Colter Wall is not the only person of interest to roots and Americana fans who participated in the production. Jason Isbell was sighted on the set of the movie back in November of 2018, and is expected to make either a cameo or extra appearance in the film.