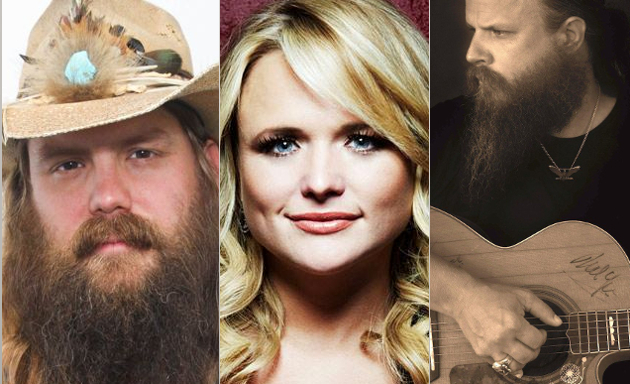 With these words, Rolling Stone Country, along with other media personalities and outlets, and certain music performers themselves, have specifically lumped a certain group of other country music performers directly in with Nazis, white supremacists, racists, and murderers simply because they have yet to speak out against or otherwise address the unfortunate, embarrassing, and repugnant events recently in Charlottesville.

The definition of “complicity” states: “The state of being involved with others in an illegal activity or wrongdoing.”

So to understand the implication that Rolling Stone Country and others are making at its very core, they are saying that artists such as Chris Stapleton, Miranda Lambert, Luke Bryan, Keith Urban, Kenny Chesney, Dierks Bentley, Cody Jinks, and Jamey Johnson (who specifically served in the United States Marine Corps for 8 years), are not just sympathizers, but are “involved” (as stated by the definition of “complicity”) in being Nazis, racists, and murderers, for no other reason than they have chosen to not address an extremely contentious, controversial, and in many cases, irrational situation refereed by unstable politically-charged ideologues, and exacerbated and amplified by a polarized and attention crazed media.

This irresponsible litmus test that is being placed on the heads of entertainers—country or otherwise, who never signed up to be part of the political process or discourse, and in many cases have sworn off addressing political matters regardless of the alignment of the issue—is nothing short of diseased, and is parallel with the same insistence on universal compliance with ideology found in ISIS, Nazis, and other extremist groups. That is not to say these ideologues are “complicit” with ISIS and Nazis, because of course this would be a ridiculous and irresponsible thing to say.

This is also not to couch the recent occurrences in Charlottesville strictly as political. The killing of innocents, and the hatred for individuals based on skin color or ethnicity is not a political subject, it is a universal embarrassment of society, and there should be nothing contentious or controversial about those stances. However the political quotient that has been interjected into the situation, and also helped lead to the disharmony and violence, cannot be ignored, or overstated.

The sickening events in Charlottesville did inspire numerous country music artists to speak out about the racism that appears to be bubbling up in the population due to current events. Tim McGraw, Kip Moore, Kacey Musgraves, Wheeler Walker Jr., and others have chosen to use their platform as celebrities to speak to their fan bases about their personal convictions, utilizing their access to the masses to assert what they believe to be important leadership. And for that, especially in the face of country music’s dubious history of holding artist’s accountable if they do not adhere to certain narrow, often conservative values, deserves respect if for no other reason than the courage it takes to hold to and express these convictions, even while running the risk of losing support from certain segments of fans.

These are important times, and it is important that individuals do take advantage of positions of leadership to attempt to diffuse hatred, bigotry, and racism in all of its forms. And let’s face it, you run a greater likelihood of interfacing with that racism in country music than you are in pop, EDM, or Adult Contemporary for example. Performing artists have the right to assert their political beliefs similar to any citizen, and shouldn’t be expected to “shut up” just because they are entertainers.

But saying performers must publicly address certain issues, or make certain stances, or it directly puts them in league with Nazis and racists or any seedy element, is a dangerous behavior born from hard line ideological fervor that runs the risk of character assassinating people and besmirching otherwise good names based strictly on assumed notions on someone’s personal beliefs.

What should be obligatory is the understanding that the vast majority of people are opposed to Nazism and the killing of innocents unless they claim otherwise, or have a dedicated history of behavior that would make one suspicious of Nazi-istic or racist leanings. There is nothing in the personal history of Miranda Lambert, Chris Stapleton, Luke Bryan, or the scores of other country music artists who are being personally called out by name by the media and other artists that would lend to the idea that they have inklings towards racism, and especially Nazi sympathies. Just putting the terms “Nazi” and “Miranda Lambert” together seems ridiculous, and unconscionable when brought to the conclusion of what it really means when you assert that these artists are “complicit” with the behavior of the bad elements responsible for the atrocities in Charlottesville and other places.

There are many reasons artists may choose to stay silent. One might be a fear of retribution from country music’s conservative crowd. This is a fair concern in the wake of what happened to The Dixie Chicks. But so far a similar instance of an artist or group getting blackballed for political beliefs in the last decade has yet to materialize, even as high-profile songs such as “Follow Your Arrow” by Kacey Musgraves, and “Girl Crush” by Little Big Town have opened up that possibility. If an artist did have their career ended because of their political beliefs, this would be an unfortunate and embarrassing development in country music. But even The Dixie Chicks just concluded a very successful reunion tour. The fear of artists finding themselves rebuked by the industry for political beliefs beyond the already-insular environment of corporate radio seems unlikely, even if certain stances still do alienate certain smaller segments of fans.

What is much more likely is the communication artists make with their fan bases about certain issues becoming a conduit for the racists and white supremacists themselves. Though statistically, the size of these pro-Nazi and white supremacist groups is a very small segment of the greater population (despite the characterization by the media), releasing statements on such matters often acts as a magnet for such seedy elements, putting these artist’s statements in the precarious and unfortunate scenario of becoming forums and bullhorns for the racists and Nazis to spread their message, as opposed to putting a stop to such rhetoric. This is the more likely reason certain artists have chosen to not speak out—seeing the results of other artists who took a stand—as opposed to fear of retribution from the industry or general fans, or the absurd notion that they are “complicit” with the Nazis and white supremacists.

Once again, it is unfortunate that the country music community harbors such elements that would invade an artist’s post simply coming out to condemn virtually universally-recognized subversive behavior, and it is something the country music community should continue to work on and address. But in these circumstances, the symbolism of posting a public statement should be overridden by the substance of what the eventual outcome may be. And often these racists aren’t even country music fans, or fans of the specific artists; they are opportunists exploiting the opening when a celebrity broaches certain subjects. Ultimately, all of these issues are being exacerbated by social media, making it a bad forum for celebrities to post missives to their fans about these issues.

Racism will not end just because a country music star decrees it should be so. Nobody stopped using drugs because of Nancy Reagan or PSA’s. It will take more systematic and fundamental work to rehabilitate each individual’s hatred into understanding and acceptance. Often talking down to these elements or attempting to eviscerate their institutions only exacerbates their hatred, swells their numbers, and calls them to action. This is exactly what happened in Charlottesville. This is not to say that racism shouldn’t be met head on, but it should be handled smartly in a manner that is effective at stamping out it’s hateful ideology, not help spread it because celebrities are guilted into addressing it in inappropriate forums.

And for some artists, if not many artists, music is seen as a haven from hatred, political ideologies and discussion, and should be a place when the population can exhale and escape the contentiousness of modern-day society. This should not be misconstrued as being sympathetic or a haven for Nazi or racist elements. Such things should be banished from society wherever they are found. But everyone needs places where their brain can drift away from troubles, sometimes so they can tackle those same troubles with a clear mind and recharged spirit. For many, music is that place.

Moving forward, music could be, and should be, a vital and irreplaceable tool for bridging differences, and fostering understanding across political, cultural, and racial divides. But if we let the same ideological polarization creep into the music space that has dogged the rest of society, we run the risk of music losing its potency to bring people together, and break down barriers in perspective that racism and radical thought hides behind.