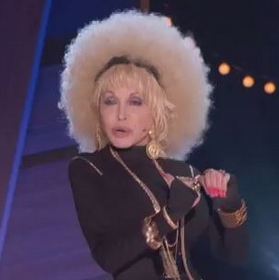 No, this isn’t any more of a watershed moment in the ongoing incursion of rap into the country format than when Taylor Swift did a faux rap with T Pain called “Thug Story,” exclaiming “I live with my parents, yo.” Country Music Hall of Famer Dolly Parton is good friends with rapper turned daytime stay-at-home personality Queen Latifah, and on a show set to air this Monday (10-21-13), the self-proclaimed “Queen of Dollywood” comes out and does a 90-second rap routine before her interview. Dolly Parton and Queen Latifah recently starred together in the 2012 musical movie Joyful Noise.

Though Dolly’s performance is nothing more than a spoof, it comes at a time when rap is taking dominant role in the country genre, with top male acts like Luke Bryan, Jason Aldean, and Blake Shelton cutting country rap songs and seeing them climb to the top of the country music charts. Though the 67-year-old Dolly Parton had her part in country’s crossover phase in the early 1980’s, she’s also been one of traditional country’s biggest champions over the years and is revered as a country music queen.

One interesting note about Dolly’s rap routine vis a vis telling Miley Cyrus “I got your ‘wrecking balls’ right here” (in reference to Miley’s latest single), Dolly is Miley Cyrus’s godmother, and the two women are apparently pretty close. Miley has been known to sing Dolly’s hit “Jolene.”