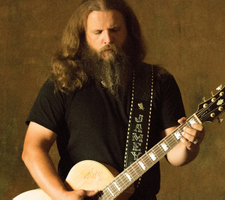 Jamey. Jamey Johnson. Yeah, hey man, it’s your old pal country music here. Sorry to bother you like this out of the blue and everything, but it looks like I’ve kind of gotten myself into a mighty big pickle. Generally speaking I’m one of those proud people that doesn’t like to ask for anything from anybody. But honestly man, I need your help. Now I understand that you’re in some sort of contract dispute or something, and that’s usurped a lot of your desire to write new songs and release new albums and everything. Trust me when I say, I know how rough these disputes can be. Ever since I started in this music business, intrusive and unethical label practices have been stultifying the creative process for many of the artists flying my flag, generally wreaking havoc on their freedom and artistic expression, not to mention how many people are getting hosed on the accounting side of things.

I can only imagine the kind of anger and heartache you’re dealing with, but man, I need you. And I need you something fierce. Over the last couple of years … well hell, really for the last twenty some odd years, but especially the last couple, stuff has really been going downhill. I turn on CMT, and if there aren’t frat guys urinating on themselves in some reality show, or some inbred passed out face first in a vat of gravy, then it’s Florida Georgia Line rapping in some hip hop song while motorcycles go flying through the air and explosions go off in the background, while Luke Bryan is non stop pelvic thrusting the poor, innocent air in front of him. It’s like some wild ass circus Jamey, I’m telling you.

And then you turn on the radio, and somehow it gets even worse. I thought Florida Georgia Line was bad, but now there’s a half dozen bands that are more like Florida Georgia Line than Florida Georgia Line is. Have you heard of Chase Rice, Jamey? If you haven’t, don’t waste your time, trust me. You should see this dude’s Twitter feed. It’s like an instruction manual for duchebags, but I digress. Oh! And then the other day I was listening to the radio, and Jerrod Niemann … you remember Jerrod Niemann? I mean he used to not be that bad back in the day. But he’s gone through some kind of mid life crisis or something, and the dude sounds like he’s got an EDM DJ stuck up his ass. He was on there talking about “riding his donkey to the honkey tonkey” and I just about hurled my Taco Bell waffle taco out the truck window. Yeah I know, I shouldn’t be eating that garbage, but I won’t lie, I was curious … I mean I know back in the day me and you got a big chuckle when Trace Adkins cut your “Badonka Donk” song, but hell, that was just parody. By the way, you still got that bass boat you paid for with those royalties? I saw the pictures on MySpace; it was a beauty. Ha, MySpace. Man we go way far back.

And I guess that’s why I’m writing you. Look man, back in the late 00’s, you were the best thing going. You were what I needed: substance with commercial appeal. Hell I even got you a bunch of those stupid industry awards, and for a moment there it looked like you could be the next real deal thing in country music. Hell forget looking like it, you were the next real deal thing! And that’s why we need you back man. We need to get you back in this fight. We need to get you back in the ring, even if just to keep these other losers honest. I mean, who else we got that has already proven they can get the industry behind them without selling out? Who can write a song like Jamey Johnson? Who’s got all that country credit for serving in the Marines and doing all that time in honky tonks, and hob nobbing with Hank Cochran? Hey, did you see Hank just got an induction for the next Hall of Fame class? See, it ain’t all bad out there. There’s still hope. There’s still something to come home to Jamey. And though all the country dudes are a bunch of douche nozzles, there’s a lot of women doing some great stuff out there these days. Have you caught a whiff of Kacey Musgraves yet? Dynamite Jamey, I’m telling you (and just between you and me, some dynamite legs on that young dame too, whoa!).

Still though, George Strait is retiring, or at least he’s gonna try to, and we need someone to step up. Come on man, you should be in the prime of your career. I don’t blame you for wanting to step back. I don’t blame you if you don’t want to be involved in all the mainstream hoopla anymore. And it’s not like you’ve stopped performing and are living on Mars. You still contribute greatly to keeping it real. But hell, just start writing some songs. Get back in the game. Participate at least. Give us something we can throw in the face of Dallas Davidson to tell him and his songwriting-by-formula buddies to take a long walk off a short pier.

You’re not friends with Dallas? Are you? Well anyway…

Most importantly man, and not to get all sentimental on your ass, but I’m just a little worried about you. You know, you put out those first few albums, and we got used to a new Jamey Johnson album every couple years. And not to jump on you man, but sometimes when you have a talent such as yours, it’s a shame to see it go to waste. So tell me where I need to be. If there’s some label riding your ass, some suit with his thumb on you, tell us the scoop and we’ll be your air support. Let’s rattle some cages. Let’s blow some houses down. You’d be surprised what a bunch of pissed-off rednecks can accomplish when we’re all moving in the same direction. Let’s get mobilized. Let’s get this thing figured out.

Because we’re here for you brother. We want to see you prosper. And most importantly, we need you.

Yours truly, and always grateful, even if you never write another song in your life,