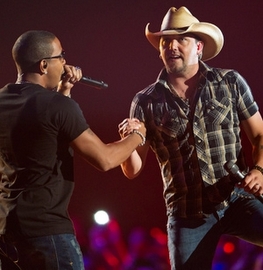 “You can’t stop what’s coming. It ain’t all waiting on you. That’s vanity.”

If you’re a male performer in country music right now, you may no longer have a choice. If you want to see your singles and records reach the top of the charts, if you want your songs played on the radio, and if you want to be in contention for the big awards, you better add some hip hop elements into your music.

It seems almost inexplicable that this statement could be made about American country music, but when looking at the top performing songs, albums, and artists in the format, and how many of them have at least some form of the hip-hop culture embedded in their music, the statement isn’t controversial, it is conclusive. And Saving Country Music isn’t the only one pointing this out.

“You hear the hip-hop thing start kicking in, and you start going, ‘Is that what we gotta do now to have a hit? Is that what I need every one of my songs to sound like now?” says Toby Keith, who not only was the best-selling country artist from the 2000’s decade, but is the owner of the influential Show Dog Universal label, and the highest paid person in country music from his stake in multiple record companies.

Even as a top label executive, Toby is having trouble convincing his own people to push music that doesn’t include electronic beats or rapping. According to Keith, when he brings them country songs, they tell him, “Eh, it doesn’t sound like what’s going on the radio today.”

The two best-charting, biggest-selling songs of 2013 so far have been songs that lean heavily on hip-hop influences: Florida-Georgia Line’s “Cruise,” and Luke Bryan’s “That’s My Kind of Night.” Both songs broke records in 2013, with “Cruise” breaking the all-time record for any country single with 23+ weeks at the #1 position, and “That’s My Kind Of Night” breaking a record for the most consecutive weeks at #1 for a solo male performer—a record held since 1966.

Currently, the #1, #2, #6, #7 songs on the Billboard Hot Country Songs chart feature hip hop influences, while Jason Aldean, Blake Shelton, and Tim McGraw at the #4, #5, #9 positions respectively have all had major country rap singles, including Aldean’s “Dirt Road Anthem” that was the biggest-selling song in all of country in 2011. Three of the five nominees for both Entertainer of the Year and Male Vocalist of the Year for the upcoming CMA Awards have cut country rap songs.

How Hip-Hop Stole Country Music: The Arrival of the Mono-Genre

But just because a song has hip hop influences, doesn’t make it bad. It has been the combination of country rap and the laundry list style of lyricism that has been the 1-2 punch to the integrity of the country genre, and especially the material emanating from male talent. This trend has caused a recent uproar, with many artists speaking out, including artists who have themselves participated in either the country rap or laundry list trend, including Jake Owen who recently said, “We need more songs than just songs about tailgates and fuckin’ cups and Bacardi and stuff like that,” potentially dissing Toby Keith’s hit “Red Solo Cup.”  Keith was also arguably responsible for the first country rap song in the modern era when he rapped the verses in his 2001 hit “I Wanna Talk About Me.”

It may not be as much that Jake Owen and Toby Keith are being hypocritical as much as they are big stars that are expected to deliver hit singles, and they are sick and tired of chasing the current trends where there is little or no room for substance. When Keith spoke about his recent single “Hope On The Rocks” that stalled at #18 on the Country Airplay chart, he said, “…you start playing it to a twenty-something audience, and it’s like, ‘Naw, man, there ain’t no mud on that tire. That ain’t about a Budweiser can. That ain’t about a chicken dancing out by the river. That ain’t about smoking a joint by the haystack. That’s about somebody dying and shit.’”

So does that mean we can expect Toby Keith to go the country rap route? “I don’t know how to do that,” Keith explains. “I’m not going to change much. And when it quits working, I’ve got other stuff to do.”  But if he doesn’t, Keith runs the risk of losing his relevancy as a mainstream country artist. That is why we’ve seen middle-aged country performers like Tim McGraw and Ronnie Dunn cut country rap songs recently, and why most of the up-and-coming country males that are making their mark are doing it through country rap.

Peer and financial pressures are making it mandatory for male country artists to start off their songs with a hip hop beat, or rap the verses to their songs, even if it is just a verse or two. Forget the stigma of trying to bring hip hop into the country format. If you’re a male country star in 2013, you can’t afford not to.