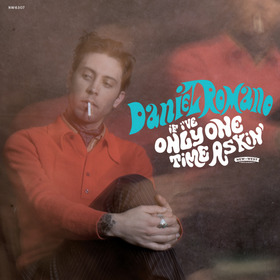 Country throwback and old soul Daniel Romano has just announced he’s got a brand new album on the way, and it’s through the formidable roots label New West Records—home of Steve Earle, John Hiatt, and a host of other notable names in traditional country and Americana. The new album’s called If I’ve Only One Time Askin’, and it will be delivered on July 31st. It’s his follow up to the critically-acclaimed Come Cry With Me from 2013.

Self-produced, and recorded in his hometown of Welland, Ontario, the album is said to include strings, horns, piano, pedal steel, accordion, and be much more than your average neo-traditional release from its countrypolitan feel and exploration of nostalgia. Romano himself calls it “Mosey” music. “Mosey music is a study in contrasts,” says Romano. “There’s glitz and grit, reveling and wallowing, wretchedness and showmanship. Mosey music’s pioneers wore their battered hearts on sequined sleeves.”

On songwriting, Daniel Romano says, “Every time there’s something new, it gets thrown into the coat pocket. Hopefully it’s an entity and not a confused pile of papers. Sometimes you sit down and there isn’t a line. That’s when the songs are a little more ethereal.”

Notably, Nashville singer and songwriter Caitlin Rose joins Romano on the song “Strange Faces.” The two have toured together before, and the both recently played the Stagecoach Festival in California.

Romano is also heading out for a European tour beginning in the middle of May.

Listen to “The One That Got Away (Came Back Today).”

4. All The Way Under The Hill

6. The One That Got Away (Came Back Today)

8. Learning To Do Without Me