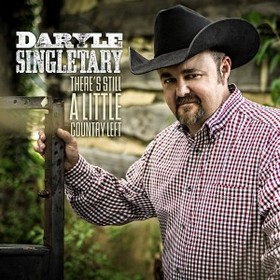 It’s been six years, since 2009’s Rockin’ The Country that self-described “hardcore country traditionalist” Daryle Singletary has released an album, and his strong country voice has been missed beyond the live shows and appearances on the Grand Ole Opry stage. Now the Georgia native is getting ready to release a new album called There’s Still a Little Country Left on July 28th. The record is already available in many parts of Europe.

And if you’re wondering what the flavor of this album might be and the title isn’t enough indication, just take a look at the track list, and listen to what Daryle Singletary has to say about it. “When I moved to Nashville in 1990, I left Georgia telling my daddy, ‘I want to make my living in country music.’ My fans are not fans of the bro-country movement, which doesn’t bother me a bit. They’re people who like it real, and that’s what I give them.”

Singletary says that Randy Travis and Keith Whitley are strong influences on the new 11-track record, and one song in particular might stand out for its message that may resonate a little deeper around these parts. Saving Country Music had been hearing about a Daryle Singletary song that evokes the “save country music” phrase in it for a while, and that’s what Daryle does in “Too Late to Save the World.”

The world premier of the song happened on the “An Intimate Evening with Eddie Stubbs” radio show on WSM broadcast April 8th of 2013, when a demo version of the song was played for the live and listening audience. “Jimmy Ritchey is a writer on it, and there’s a few other ones,” Singletary said. “They were in Florida at some kind of songwriter’s deal. They were on their way home and they were all sitting in the back, and just started talking about songs. I don’t know how it came up. I guess somebody said may have said it, ‘It’s too late to save the world, but can we still save country music.’ They wrote a song, got home, and Jimmy Ritchey called and said, ‘Will you demo this song for us?’ and I said, ‘You bet.’ And I listened to it and was like ‘Wow.'”

Too Late to Save the World

Washington’s just going through the motions, the Middle East is going up in smoke
California’s falling in the ocean, the working man and Wall St.’s going broke
The Pirates ain’t just Pittsburgh playing baseball, there out there wreaking havoc on the seas
Lord I think my give a damn’s gone awol, but then I think that even you’d agree

[Chorus] Might be too late to save the world, it may be already gone
So what say we shift our attention, to a good old 3-chord song
Now maybe I’m just talking crazy, I think together we can do this
It may be too late for the world, but can’t we still save country music?

How about getting back to stuff that really matters, like drowning in some pedal steel guitar
The more I look around the more I gather, just how bad of shape we really are
I mean who’s singing to the folks down at the factory, and all the broken hearts on stools
It’s hard to tell just what went wrong exactly, Lord there must be something we can do

**Found this on YouTube. May not stay up, so listen while you can.