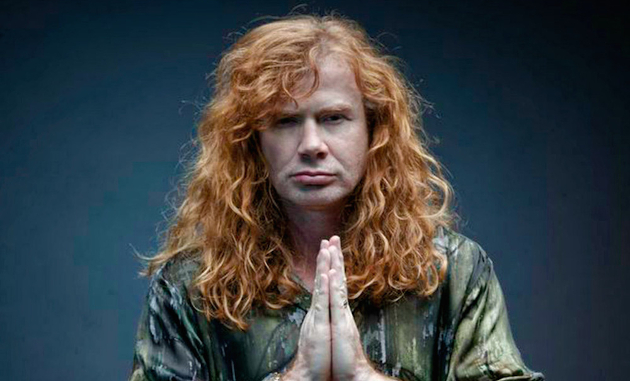 Megadeth’s frontman Dave Mustaine has been strangely lurking around the country music realm in the last few years, popping up in unusual places like his appearance at the George Jones memorial in 2013, or releasing his “bluegrass” song “The Blackest Crow” a while back. His daughter is even making dalliances with the mainstream, recently releases a frappy, senseless summer tune called “Life Is Good” that didn’t seem to go much of anywhere.

Now in a recent interview with Q104.3, Mustaine inadvertently exposed one of the big problems plaguing today’s mainstream country. A common criticism heard bandied about is that the country music of today is no more than regurgitated arena rock. Part of the reason for this is many of the guitar players that are performing in arenas every night behind folks like Jason Aldean and Luke Bryan didn’t grow up studying Don Rich and Ralph Mooney, they grew up studying Dave Mustaine, Ritchie Sambora, and Slash—all good guitar players mind you, but not in tune with the twang that makes country music unique.

“Metal guys, they’re pretty advanced with their playing. And when you watch country players, a lot of times they’re metal players that couldn’t get a gig so they settled for country,” Mustaine says. “Every single [country] band that I’ve met, any of the guitar players are like, ‘Oh man, I’m a huge fan of yours!’ It’s like, ‘What?’ Some of the performers too, they’re big fans, they love metal music.”

And you can see this when you look at the backline of pretty much any arena-level country band. The guitarist is rockin’ a spandex t-shirt and green mohawk. And as Musatine points out, they’re probably an excellent player when it comes to their technical prowess. But unlike the arena rock era when the guitarists for bands were big stars themselves, the country guys are these kind of nameless mercenaries who probably would prefer playing metal, but put up with bad pop country party songs for the big paycheck.

And it doesn’t just stop with the guitar players. “The guy who produced couple of our biggest records [1997’s ‘Cryptic Writings’ and 1999’s ‘Risk’] – Dann Huff – just won Producer of the Year this year for the CMTs,” Mustaine said in the interview. Mustaine is likely referring to Dann Huff’s win for Musician of the Year at the CMA’s in November. CMT doesn’t give out a Producer of the Year award. Nonetheless, it’s a good illustration of how the evaporation of the modern commercial rock format has caused a flood of rock personalities to infiltrate country, and ultimately influence the music in a more commercial rock direction. Nickelback’s former producer Joey Moi working with Florida Georgia Line is another good example.

This wouldn’t be all bad if the music was any good. But what you end up with is this country/rock/hip-hop hybrid most of the time that has little to no lasting core appeal because it isn’t tied to the roots of country. Instead it’s rock riffs with country window dressing to ingratiate itself to the country radio format.

Dave Mustaine isn’t throwing modern country under the bus though. “I like their music,” he says. “It’s not the music I would want to have with me on a desert island because I’m a metal guy, but I totally appreciate and respect the music.”