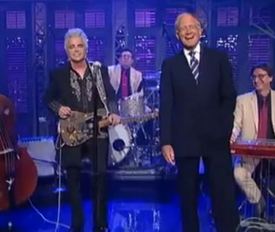 With such a glut of great roots music material starving for bigger outlets, it was only a matter of time before new avenues began to spring up to meet the demands of both substantive artists looking for more love, and salivating fans seeking something real. Surprisingly, television has become one of those new outlets, with shows like ABC’s Nashville featuring artists that never before would be given a shot in prime time, and late night perennial David Letterman giving a leg up to artists who previously had never been afforded a national television opportunity.

And Letterman’s recent run of supporting independent country and roots artists like Ray Wylie Hubbard, Dale Watson, Shovels & Rope, and many more is not the result of some crack team of publicists and booking agents working together to peddle these artists to the right people, it is coming from David Letterman himself listening to these artists and wanting them to be featured on the show. In other words, David Letterman is a fan of roots music, of artists like Dale Watson and Ray Wylie Hubbard, and is reaching out to them, wanting to give them an opportunity, just like he did last night (6-24) to Austin, TX’s Dale Watson.

“I don’t remember exactly if Dave heard Dale on Sirius XM or on “All Things Considered,” but it was one of the two, and they called us up and said, ‘We want Dale Watson on the show, and we want him to play “I Lie When I Drink.”‘ explains Beth Friend of Red House Records–the label that released Dale Watson’s latest album El Rancho Azul. “It was such a surprise because you try for years to get the attention of people, and then all of a sudden you receive a phone call from them. It’s a really happy story for us. We love Dale.” 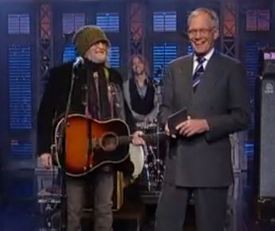 Ray Wylie Hubbard tells a similar story, how it was Letterman reaching out to them, not vice versa, and that Letterman requested Ray play a specific song.

“About 4 months ago my booking agent receives a phone call and this girl said she was Jennifer from Worldwide Pants, and Dave would like to know if Ray would do his show.” Hubbard explains. “She didn’t know what Worldwide Pants was so she goes, “Dave who?” And Jennifer goes, “Dave Letterman, January 9th.” And the booking agent goes, “Well let me make sure he’s not playing a happy hour gig in Waco, those things are hard to re-schedule.” So Dave said he wanted us to play the song “Mother Blues” but we only had 3 minutes and 35 seconds. So we take out a couple of verses and then we get up there and after we finish and he says, “Thank you, goodnight,” he asks if we’ll do “Screw You, We’re From Texas.” And I said, “Man, you’re from Indiana.” And he said, “Yeah, but I like the attitude.” So we did the extra song for the website which was really really cool of him.”

The opportunity to get to play to a national audience is one thing, but when Letterman is not simply announcing the band slotted to play, but one he purposely sought out from a sincere love of the music, this is the type of endorsement that can not only give an artist more exposure, but can give them a sense of validation that this craft they have been working at for years is worthy of a greater audience.

“Once people hear the music, they love it.” says Beth Friend from Red House. “They just need the opportunity.”