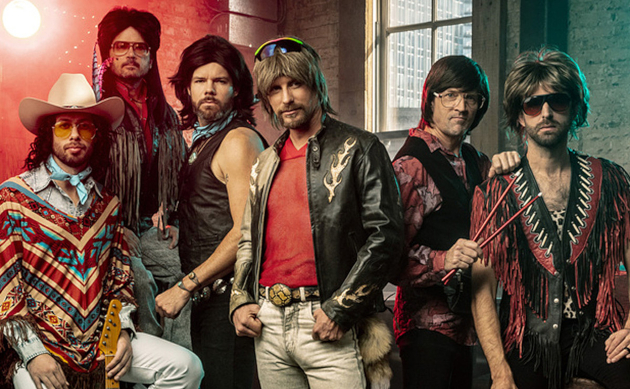 So Dierks Bentley’s whole “Douglas ‘Doug’ Douglason and Hot Country Knights” 90’s country side project has been good fun and everything, or at the least a little bit curious if you’re a country fan, even if it’s been hard to know just what exactly to make of it all beyond a way for Bentley and his touring band to blow off some steam and get silly for a little bit.

The mystery and oddball nature of the project is part of the fun of course, but after the group officially signed to Universal Music Nashville early in January, it made it even harder to draw a bead on what exactly was going on here. Would this be an outright covers project of 90’s country tunes (even though the garb of Hot Country Knights is probably more late 80’s), would it be a straight up comedy album, or something else entirely?

Now the Hot Country Knights have released their first song called “Pick Her Up” with Travis Tritt guesting on the track, and granted, it’s a little silly and will have some mistaking it as some twangy version of Bro-Country because a pickup truck is mentioned. But taking the song in stride with the spirit behind Hot Country Knights, it’s kind of badass.

Country as all get out, “Pick Her Up” is chock full of country music cliches and list-tastic lyrics that somehow work by being completely self-aware and witty, along with awakening that nostalgia in you when the worst thing you would hear on the radio dial was a kind of shallow song from someone like Travis Tritt. It’s country music laughing at itself, which is a time treasured tradition in country that just like fiddle and steel guitar, has been completely drip dried out of much of today’s mainstream music.

But there is another dynamic to this song and Hot Country Knights worthy of taking note of. This is not just a screw off single ahead of a frivolous side project. All jokes aside, “Pick Her Up” is going to be released and promoted to country radio come February 3rd, and UMG Nashville will be looking to make it a bonafide hit.

“It’s become less of a side project and my main focus for at least the first half of the year,” Dierks Bentley recently told Billboard, speaking in the capacity as the “producer” of Hot Country Knights as opposed to his character, Douglas ‘Doug’ Douglason. “I’m not really in a rush to get off this. It’s really fun and I think it’s really needed in country music right now. [The country genre], myself included, can take themselves way too seriously. This is a good reminder of why I got into country music, which is great songs, great personalities, great people, characters, colors and energy. It’s a nice way for me to reset my next project, just by being around these guys.”

Speaking in the capacity of Douglas ‘Doug’ Douglason, Dierks said, “You listen to the radio right now, oh my gosh. You wonder why there’s not a lot of girls on the radio, and it’s because the guys are singing all the girls’ songs. You’ve got the guys who are singing bro country, but they’re also doing boyfriend country. They’ve stolen the entire format from women. We need some guys to come out there and put a little ‘T’ back in country—a little testosterone. So we want to put it out there and get it going. And that song really got the juices flowing.”

Whatever persona you want to listen to, or however you want to slice it, Hot Country Knights just got real. And in the same way Dierks Bentley’s record Up On The Ridge became an entry point for many into the world of bluegrass, Douglas ‘Doug’ Douglason and Hot Country Knights could be the gateway drug back to a time when country was country. And if Hot Country Knights singles do well on radio right beside the more country singles that are already starting to pepper the charts more than any other time in the last 10 years, who knows where this could lead.

Granted, you’re going to hear plenty of grumbles about how stupid the lyrics on “Pick Her Up” are, but that’s missing the point. Of course they’re stupid. Dierks Bently is singing them in a mesh top with razor sunglasses. But the music, and the spirit with which Dierks is approaching this Hot Country Knights thing is spot-on, and so incredibly refreshing from a mainstream artist. Dirks has once again cemented his place as one of the “good guys” on a major country label, and “Pick Her Up” could do some serious good and help pull country out of the gutter if it gets traction on country radio.