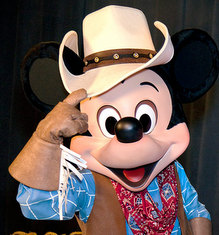 Pending approval by federal regulators, the Disney Corporation has secured a deal to buy country music for $10.5 billion dollars. The deal apparently would include all of country music’s major labels and their rosters of artists, institutions like the Country Music Hall of Fame and The Grand Ole Opry, award shows like the CMA Awards and the ACM Awards, and the naming rights to the now defunct restaurant chain “Kenny Rogers Roasters.”

“This is just the latest step in our efforts to completely monopolize every element of American culture by buying it out from under the people who created it and then selling it back to them in the form of programming on our vast media empire and on special-edition Bul-ray DVDs,” says Disney spokesman Phil Frankenfurter. “We look forward to activating synergies between these two landmark American institutions, and doing what we can to make America one big homogenous culture, free of any regionalism and diversity from anything not presented to them by mainstream corporate media.”

Disney, who already owned ABC, ESPN, as well as studios and radio stations all across the country, and 14 different theme parks all around the world, announced just last week they were buying the complete Star Wars franchise from George Lucas for $4 billion. They’re calling the acquisition of country music the “final puzzle piece in creating an American mono-culture.”

Country music, an institution the has been around for roughly 70 years, became popular throughout America in the 50’s through the radio program “The Grand Ole Opry” broadcast on WSM-AM out of Nashville. 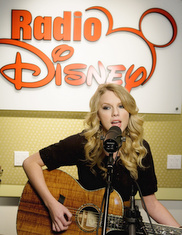 “For years, country music has been an attractive acquisition for Disney, but the timing was not right,” continues Disney spokesman Phil Frankenfurter. “From the 80’s, even into the 90’s, country’s listenership dwelled mostly in older Americans who did not fit comfortably into Disney’s demographic landscape. But in the last decade, especially the last couple of years, with country getting much younger, the timing seemed right to make this partnership. Nobody can deny that right now the hottest thing in country is Taylor Swift. And who listens to Taylor Swift? Adolescent and teenage girls; the exact people who are at the core of Disney consumers.”

Though Disney is being hush about most of its plans for country music, some of the first changes consumers can expect to see are the appearance of the well-recognized Mickey Mouse ears being added on the marquees of certain country music landmarks like The Ryman Auditorium. Disney is also developing a “Country Music Princess” franchise, swapping Cinderella, Snow White, and Ariel for Taylor Swift, Carrie Underwood, and Miranda Lambert.

“I love having Disney raise my kids,” says housewife Angela Barnum of Oshkosh, Wisconsin. “With great role models like Lindsey Lohan, Miley Cyrus, and Brittney Spears coming from Disney’s roster, I love the free time and piece-of-mind Disney gives me from having to raise my kids myself.”

Kenny Rogers, who was recovering from his latest plastic surgery procedure, could not be reached for comment.