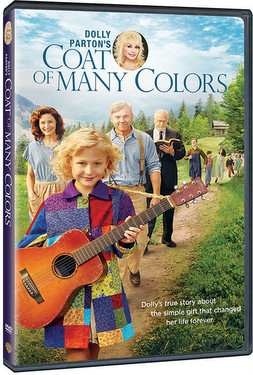 Dolly Parton’s NBC made-for-TV movie Coat of Many Colors went from a sweet little movie to watch with the family over the holiday season, to one of the most successful and cherished movies based on a country music legend’s life released in recent memory.

The overnight ratings after it’s initial airing on December 10th put it as the most-watched original TV movie in the last three years with 13.2 million viewers tuning in during the broadcast’s final half hour. As word of mouth spread, it also became the highest-rated TV movie ever using Nielsen’s “National TV Toolbox Live+ Same Day and Live+ 3 Days” measurement, with an increase of 2.548 million viewers. The movie did so well, NBC chose to re-air it on Christmas.

Now the movie is set to be released on DVD May 3rd, just in time for Mother’s Day. The DVD will include an alternative version of the movie, deleted scenes, and other extras. The DVD will MSRP at $19.98.

Coat of Many Colors stars Jennifer Nettles as Dolly Parton’s mother, Ricky Schroder as Dolly’s father, and Alyvia Alyn Lind as a 9-year-old Dolly Parton. The movie is inspired by actual events in Dolly’s life. Dolly Parton does not appear personally in the film itself, but does give an introduction to it, and acts as the film’s narrator.

As Saving Country Music said in its review, “What was astounding is how good it was as a television movie … Coat of Many Colors was strikingly honest and candid in segments, was smeared with dirt and grease to the point where not only were the characters and settings believable and historically accurate, but you could almost smell the sweat and feel the grit in gripping scenes. The film was bold in how it dealt with very private and personal family issues, at points challenging the definition of a ‘G’ rating in how graphic both the language and depictions played out, and chose to highlight more dark moments than light ones to render what ultimately was a positive story, but one fraught with tragedy, personal shortcomings, and public doubt of faith before eventually finding redemption.”

Coat of Many Colors is the first of multiple movies planned on portions of Dolly Parton’s life that will air on NBC in the coming years.

Pre-Order Coat of Many Colors on DVD