Don’t Resist It. Just Give Into Shinyribs and “I’ve Got Your Medicine” 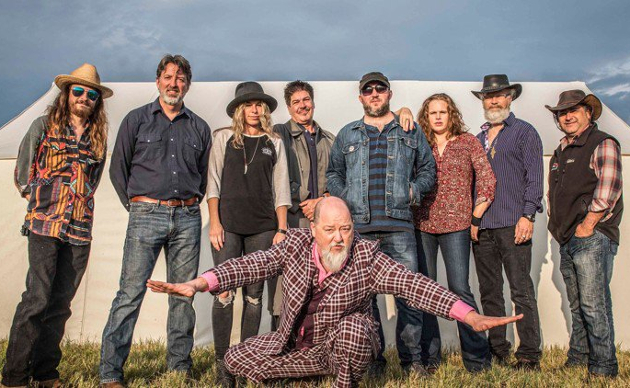 I was once like you, Mr. or Mrs. Skeptical Country Music Fan. I remember the first time I interfaced with Shinyribs, and it was a strange experience to say the least. Here I was taking in a typical show of Texas country music, with various names coming out to play their respective sets one after another. And then here comes this bald-headed, bushy-bearded, Buddha-bellied weirdo guy in froofie pants and sandals, shaking his hips left and right and singing TLC covers and I thought, what the hell just happened?

It wasn’t even that I was against what was going on as much as it was so out of left field, I just didn’t know how to process it. My mind had to shift gears from being at a country show to taking in some weirdo Austin funky jazzy freak prancing around on stage, even though the band behind him looked like a bunch of good ol’ Texas redneck pickers plucked from various Red Dirt projects that had ended up stuck in a ditch somewhere. I knew that Kevin Russell used to be in the Gourds and all of that. But still, it was just a little too much to be able to compute on the fly.

Over time though, and going to these typical Texas country events and Kevin Russell almost invariably showing up in a loud suit and prancing all over stage, and especially seeing the reaction from the crowd as these rednecks would be losing their minds with excitement, I slowly got worn down, or wizened up from my trepidation, until next thing I know I’m bobbing my head to the chorus to TLC’s “Waterfalls” and hoping nobody notices I’m that dude from that hard line country music website.

Shinyribs is total ridiculousness, and only “country” in fleeting moments and by accident. This goes without saying, so save your comments about what Saving Country Music should and should not be discussing. It’s madness that Shinyribs has been taken in so lovingly and held close to the bosom by the Texas music scene as it has, to the point where it’s now considered a headliner-level act. But that also speaks to the sheer infectiousness of the music and presentation, and the near universal appeal of it. If Shinyribs can break down Texas rednecks and their truck nuts to listen to this stuff, then it’s all downhill from there. 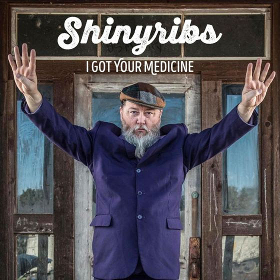 Putting on a crazy live show where everyone’s dancing and singing along is one thing though, and translating that energy, infectiousness, enthusiasm, and showmanship to an album is a whole other can of worms, and that is where Shinyribs has struggled in the past to take this thing to the next level, at least until now. Not to belittle the band or the songs, but beholding Kevin Russell at center stage is the key to the Shinyribs experience.

This is where their latest record I Got Your Medicine comes into play. I have to think that saddling up with the excellent Jimbo Mathus as producer here was key. Because not to belittle previous efforts from the band, but the home game of Shinyribs just wasn’t the same as the live version. Jimbo Mathus, as a multi-decade aficionado at building that across-the-tracks sound into his music, knew exactly what to do with Kevin Russell and Shinyribs. This stuff is not country, and it’s not really Texas, unless you go far enough east. The heart of the Shinyribs sound lies somewhere straddling the Louisiana and Mississippi border, caught in a bayou with a cane pole, fried up in a vat of lard on a back porch, and served in a shake shack. It has a gypsy soul and dark skin. And Jimbo Mathus was the right cook to serve it up proper.

I don’t give a shit what you call it, Shinyribs and I’ve Got Your Medicine is just a damn good time. It’s a jambalaya of influences. Country, Dixieland, and other herbs and spices are certainly in there, but the main ingredient is that Louisiana soul that has somehow found a vessel in Kevin Russell and can’t be contained. And this music isn’t just presentation and fluff. Russell writes all but three of the twelve songs on this record, and of all the other assets to it, songwriting might ultimately be its strongest.

What I’ve Got Your Medicine does best is to sell you on the idea that Shinyribs is something that you should be a connoisseur of. The first part of this record is not all wild-assed like much of their live show. Kevin Russell really takes the time to hone in on his singing to ingratiate this music to you without all the visual aids and antics of the live experience. You think of Russell as an A-list performer, but not an A-list singer necessarily, though not to knock him. Yet this record really pulls out the best of his singing talents, allowing him to focus all that energy of performance into producing recorded magic.

A song like “Trouble, Trouble” shows good insight via songwriting, without losing the fun attitude of what Shinyribs is all about, and by the time you get to the heart-wrenching “I Knew It All Along,” Kevin Russell has your attention rapt. That’s when the wild-assed material more indicative of the live show begins to comes more hard and heavy, and you’re even more receptive to it because you no longer regard this as just the home companion to a silly live show, but a serious dissertation on American soul music, and your heart and mind is willing to go wherever Shinyribs decides to take you, which is a fun, rarely completely serious, but never totally stupid romp through the wild mind of a completely unique individual who is the true kind of “weird” most Austin musicians and residents only wish they could honorably emulate.

Shinyribs is not for everyone, but it should be, if folks would just get off their high horses and submit to the good times and good vibes Kevin Russell brings.

Purchase I Got Your Medicine from Shinyribs

Purchase I Got Your Medicine from Amazon