The delightfully simple songs of Dori Freeman have made her one of the most cherished songbirds of roots music from this generation, and now she’s getting ready to add to that growing legacy with a new album. The Galax, Virginia native has deep ties to the music from growing up at the legendary Old Fiddler’s Convention that’s been going on for nearly 85 years in Galax, and studying under her 87-year-old grandfather and local music legend Willard Gayheart, as well as her father Scott Freeman.

Recently Dori Freeman participated in the recording of a very personal project to her, helping her grandfather release his first ever album called At Home in the Blue Ridge on May 24th. “It was a special thing to get to do,” Dori says. “I’ve been picking with him and my dad for a long time, since I was a teenager, but hadn’t recorded anything like that with both of them. Plus it was great to get to work with a lot of originals that he had written over the years. Music has always been the most important part of my family. It’s a big part of why I have such a good relationship with my parents and my grandpa.”

Now Dori Freeman is readying the release of her own new record called Every Single Star. It is once again produced by Teddy Thompson, who is the son of British folk rock musicians Richard and Linda Thompson, and who worked with Dori Freeman on her previous two records. The new album will be released on September 27th through Blue Hens Music. 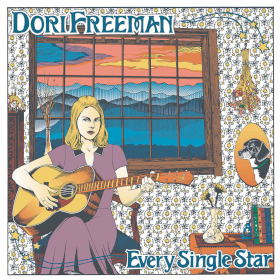 Dori Freeman’s debut self-titled record from 2016, and the followup Letter Never Read from 2017 both dealt heavily with a breakup Dori experienced. Freeman attended Virginia Tech for a while after high school, but then moved home and gave birth to her daughter Osa, becoming a single mother at the age of 22. Instead of hindering her desire to pursue music, Freeman says Osa was her inspiration to pursue a career in songwriting and performing, for Osa and herself.

Every Single Star is said to be more hopeful than the previous efforts, inspired in part by her daughter, and new husband Nick Falk, who also plays drums for Freeman. It is slightly more electric and country compared to the more sparse moments and even a capella songs of her previous records, but still comes with Dori’s simplicity and refinement of writing, performed with the voice of an Appalachian angel. Dori also says some of the songs are inspired by characters culled from interactions with friends and family.

“I’ve definitely focused on the perspective of women in my songwriting,” Freeman says. “I like to write about things I’ve been through because I know that pretty much every other woman has likely been through those same things. Listening to music written by other woman has been helpful to me as well. And it’s nice to write about good situations too, not just focus on the negative.”

Freeman says she was listening to a lot of Emmylou Harris and Linda Ronstadt at the time Every Single Star was recorded, as well as Emmylou and Linda’s work with Dolly Parton in the landmark Trio project, focusing on vocals being strong in the mix. The song “All I Ever Wanted” from Dori’s new record is said to be heavily inspired by Ronstadt directly. The album was recorded at Figure 8 Studios in Brooklyn over five days.

‘Every Single Star’ will be released September 27th.