Doug Seegers Beyond The “Homeless Man Made Star” Story 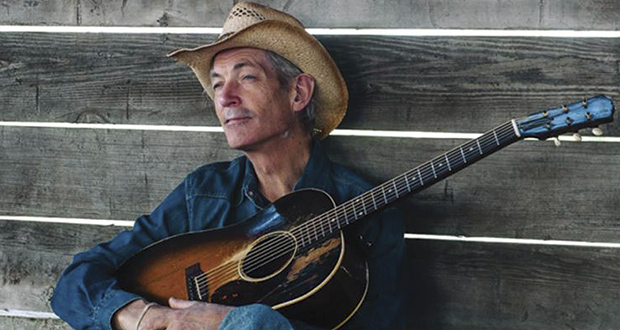 The story of the homeless Nashville singer-songwriter done good named Doug Seegers crossed the Saving Country Music news desk early on in the story’s cycle, before big outlets like NPR and the Wall St. Journal were running big features on the heartwarming tale, but for whatever reason, a story that seemed like it was fit for telling filled me with a bit of trepidation. Even though early samples of Seeger’s songs seemed quite promising, and so was the news that artists like Emmylou Harris and Buddy Miller were involved in an upcoming album, there was just something philosophical keeping me from really buying in to the story 100% as a testament to the human spirit, and the spirit of giving that everyone was making it out to be.

Homelessness is such a complex issue, and it’s so easy for people who have their positions secured in the social net to look at a homeless person as a product of laziness, or a problem of governmental neglect, when really what causes someone to slip through the cracks is an involved set of circumstances that includes fluid details of mental illness, addiction, lack of familial support, and so many other factors. What caused Doug Seegers to go from living in upstate New York with a wife and two kids to living on the streets of Nashville? The way the story was being presented was almost a little too Hallmark Channel and heartwarming. I needed to actually hear the music before I held the Doug Seegers story in some high regard.

And no offense to Doug Seegers, but why should he be chosen to be picked off the street and have a big production album made for him when there’s hundreds, maybe thousands of other artists out there patiently waiting their turn that may deserve this chance just as much, if not more, including artists who have shown initiative and self-discipline and reliance over years, making them arguably more worthy of investment? 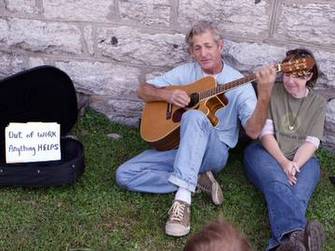 As the story goes, Doug Seegers was a musician in Austin, TX and New York before he got married and moved upstate. At some point he showed up in Nashville by himself, and was living on the streets and hanging around The Little Pantry That Could in west Nashville, playing and singing at songwriter nights. Then through a set of circumstances, he was discovered by a Swedish television crew that happened to be in Nashville filming. The host Jill Johnson heard about Doug from a street food vendor who told her Doug could sing. The film crew found Seeger who played his song “Going Down To The River” for them, and later the show came back and taped a Doug Seegers performance at Johnny Cash’s recording cabin outside of town. When the Doug Seegers episode eventually aired in Sweden, Seegers became a cultural phenomenon in the country, and he was subsequently signed by Lionheart Music Group to record and release the Going Down To The River album.

Emmylou Harris was brought in to sing on a Gram Parsons song, and Buddy Miller who apparently knew Seegers from his days as an Austin musician was also brought on board. Will Kimbrough was named as the producer, and by the time Going Down To The River was released in Sweden, Doug Seeger’s popularity was such that it shot to #1 on the charts and was quickly certified Gold, helped along by a 60-date tour and a big festival appearance by Seegers in the Scandinavian country.

But was this a symptom of hype, or the result of good country music? The allure of a story about finding a diamond in the rough on the streets of Nashville, polishing him up, and making him a superstar is the perfect type of romantic notion for a Swedish television audience swept up in the fantasy of American culture, but would Doug Seegers’ music translate to even a viable listening product for well-cultured country music ears here in the States? We couldn’t even tell completely until October 8th when Going Down To The River finally received its U.S. release, nearly half a year after the songwriter had become a Swedish television and cultural icon.

Featuring Gram Parson’s noted composition “She,” the classic Hank Williams song “There Will Be Teardrops Tonight,” and ten original songs penned solely by Seegers, Going Down To The River presents a troubled, but gentle and sweet man with a lifetime of pent up stories to tell, and a tear-soaked voice that despite its noticeable toothless lisp, conveys tremendous emotion and evidences remarkable phrasing instincts and delicate control. Going Down To The River has a classic, late 70’s smooth country feel to it with a traditional heart and a small taste of the blues, seeming to evoke the period stylings of the original era when Seegers’ songs were likely written many years ago. 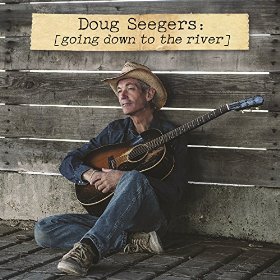 “Down To The River” is the song that started all the Doug Seegers Swedish hype, and the classic story of atoning for sins in the muddy waters of the American South is done with such original flare and is a perfect exhibition for Seegers’ vocal strengths, the song feels worthy of its international praise. But “Angie’s Song”—the first song on the album—may just be the gem of the entire endeavor. Excellently written and tastefully produced, it’s the sound of Otis Redding meeting Hank Williams, and the warm love story at the heart of the song truly makes it something special.

There’s really not a slouch on this album. The songwriting and singing evidenced by Seegers on one track after another are really a remarkable display of the talent that can be picked off the Nashville streets and shine with a little polishing. “Lonely Drifter’s Cry” and “Pour Me” are pure, classic country songs plain and simple, and so is “Gotta Catch A Train” and “Burning a Hole In My Pocket.” And when I talk about how country some of these compositions are, I’m talking so classic and sweet, with just the right amount of steel guitar and laid back drumming and bass, you feel like you were listening to what Hank may have recorded if he’d lived a little longer and had a little more Motown or Memphis in his voice.

Even the two covers were handled so well they didn’t stick out as foreign to this song list, and if you notice these were the two songs Seegers collaborate with Emmylou and Buddy Miller on, leaving his original compositions as you may have heard them at the Little Pantry That Could songwriter showcases in west Nashville. Some of the more bluesy numbers, like the last song “Baby Lost Her Way Home Again,” and “Hard Working Man” felt a little out of place on what is overall a very classic-sounding country album, but this might have been Will Kimbrough doing his best on what probably are the album’s weakest tracks artistically.

It very well may be true that Doug Seeger’s story could be anyone’s, and that you could crash the streets of Nashville, Austin, New York, or Los Angeles, and put together an entire roster of remarkable talent that is currently sleeping on the streets, as even more worthy musicians sit teetering on the brink of homelessness themselves because they’ve been overlooked by the industry. But that doesn’t make Doug Seeger’s talent any less worthy of being singled out as it has, and as Going Down To The River attests, any and all praise Seegers has been showered with over the last six months and counting is worthy and warranted.

Once again, the European appetite and ear for American country music, and the willingness to dig deeper and offer support to worthy artists, wins out over the efforts of country music’s home once again. Of course Doug Seegers was a homeless man living on the streets, because that’s about the assessment of value American society has placed upon the classic style of country music. Doug Seegers may have demons in his back pockets or skeletons in his closets yet to be revealed, and he may have had his entire life to write this album. But Going Down To The River is as good of a classic country album as you will hear all year from anyone.

Preview & Purchase Tracks to Going Down To The River