As if the Austin, TX guitar slinger-songwriter, and Chili Cold-Blood and Moongangers-fronting Doug Strahan didn’t have enough pots boiling on the stove, here he is throwing together a new project called Doug Strahan and the Good/Bad Neighbors, and releasing a new album Coal Black Dreams, Late Night Schemes that etches yet another notch on his barrel of badass releases. Straight out of a 1970’s time machine, this roots-fusing, country funky, genuine Austin freak of the old-school variety sounds like the smell of your chain-smoking crazy uncle’s old coat, and looks just as cool.

Many try to resurrect that heroine sweat sound of the 70’s. They throw reel to reel seances. They blow all manner of money on vintage gear. But I’ve never heard someone get so close to the true heart of that sound as Doug Strahan does on this album. He doesn’t strike the mood of Fleetwood Mac’s Rumors or Eric Clapton’s Slowhand, he hits on the vibe of the albums that inspired those—that deep, gritty shit from JJ Cale, The James Gang, and Faces before Rod Stewart started screwed everything up. This is the real deal folks. The textures on this album are sublime, delivered with this incredible depth perception that few have the patience or expertise to pull off, making this album a vintage Audiophile’s paradise even if Strahan was reading from a phone book or covering Bobby McFerrin. 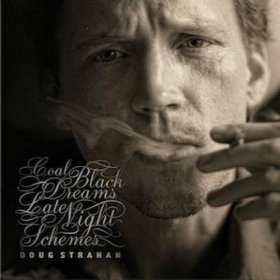 Maybe a little more classic rock than country for the most part, but still with some excellent country songs, Cold Black Dreams, Late Night Schemes has a little something for everyone … well except for those glow stick-twirling EDM freaks and Florida Georgia Line losers, but they can go suck black lemons; we like it loose and a little off-time, and that’s what Doug Strahan delivers with blurry-eyed beatnik coolness.

If you want to talk about real deal country, feast your ears on the steel-guitar-laden and twangy “Third Get Go”. With lines like “…sometimes love just falls out of you,” Strahan proves that he isn’t all tone and presence; he can write one hell of a song too. I’ll be damned if the ultra-sad and personal “Sunny Day” that closes out the album couldn’t have been written by Hank Williams himself.

From there the album evokes a bit more of a rock aura, though always with that country/blusey/rootsy underbelly, dirtied just right by running everything through a 40-year-old throwback filter. “I’ll Make It Rain” ropes you in with a nasty Waylon phase guitar, with the faraway Charlie Watts-style drums making for a catchy rhythm as Strahan moans in the background sounding like he’s a room away. Another of the good songwriting performances is the opening track co-written with Marissa Cox and Skye Cooley called “Good Cross Winds” which shows off Doug’s soulful side, while the harmonies in the chorus of “Down Time Abilene” inspire shivers.

Something else I like about this album is that it’s only eight songs. Maybe this is the talk of a jaded reviewer, but there’s something to be said about packing a punch and leaving the audience wanting more. This philosophy is something else Strahan imports from the early 70’s that other musicians could learn from.

For us lost souls that woke up in 2014 and wondered what the hell happened, Coal Black Dreams, Late Night Schemes sounds like home.