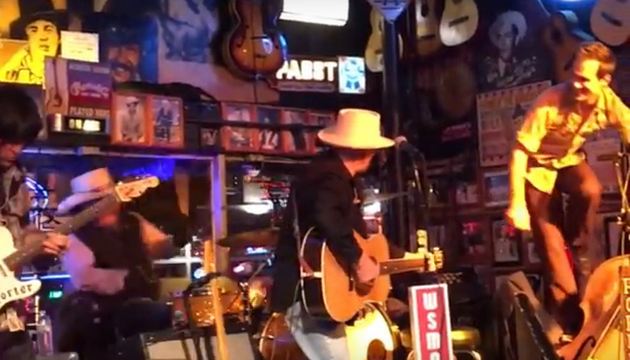 Alright, so normally I wouldn’t post some silly, viral video such as this. But it’s Robert’s Western World—one of the last bastions of true country music on Lower Broadway in Nashville. And it’s the Don Kelley Band, which is one of Robert’s and Lower Broadway’s most legendary bands.

“The Don Kelley Band has been playing on Lower Broadway for the last 30 years at least, and pretty much Don Kelley’s band is the primary school for hot shit Tele [guitar] players in Nashville,” bass player Geoff Firebaugh, who used to play Robert’s with BR549 and now plays with Hillbilly Casino told Saving Country Music a while back. “The guys that are on all the country records like Dan Huff, Brent Mason, Redd Volkaert from Merle Haggard’s band, Johnny Hiland, they all played with Don Kelley … I’ve seen musicians go down there and you get put to the test. Either you get good or you go home.”

When Lower Broadway was a virtual ghost town in the 90’s after The Ryman Auditorium was shuttered and the Grand Ole Opry moved across town, Robert’s Western World was the epicenter for the revival that turned Lower Broadway into the bustling part of town it is today. And the high-energy, high-caliber stage shows were the reason it became the destination spot for players and fans alike.

Anyway, Friday night (1-29) at Robert’s Western World, The Don Kelley Band was on the stage in the 6:30 to 10:00 p.m. slot. As the band was putting together a big finish for the classic Western song “Ghosts Riders in the Sky,” and the bass player Slick Joe Fick is doing a bass stand, and the drummer Stan Saxon rises to his feet to pull off a huge cacophonous crescendo, he loses his balance, tips back, and falls out of the plate glass window behind the stage as drums go flying, landing in a shower of glass shards on some unsuspecting revelers outside on Lower Broadway.

“The guy landed on me and another couple with his snare drum on the sidewalk,” says Patrick Harrigan who happened to be walking by at the time. “Broken glass everywhere. Crazy.”

Luckily, Stan Saxon wasn’t injured. But he probably pulled off one of the most awesome finishes in the history of Lower Broadway. And word is after the incident, he brushed himself off, and walked across the street to play another four hour set.

UPDATE: Word is Stan Saxon did injure a rib during the fall, but he’s okay.

P.S. – If you ever find yourself at Robert’s, order the pork chop sandwich!