Eddie Spaghetti Is Back with “The Value Of Nothing” (Album Stream)

Notorious Supersuckers front man Eddie Spaghetti is back with a brand new solo country rock record out 6/18 on Bloodshot Records called The Value of Nothing, and for the first time for one of his loner country projects it includes all original tunes. 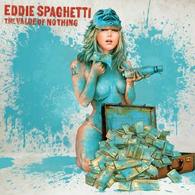 The West Coast country punk rocker recorded the new album in his adopted hometown of Austin, TX with help from musician/zombie killer Jesse Dayton, hoping to capture an authentic country sound, but ended up with “a hybrid: a ragtop-down road trip soundtrack; an album embracing the guilty and not-so-guilty pleasures of classic rock, hooky-as-hell Texas roadhouse, and the always lurking- on-the-corner-barstool dirty joking of classic Supersuckerism.”

Eddie Spaghetti and The Supersuckers have helped define the nexus between country and punk for years, starting with their landmark 1997 punk to country crossover Must’ve Been High. Since then Spaghetti and the Supersuckers have collaborated with the likes of Steve Earle and Willie Nelson. Spaghetti’s 2010 album Sundowner was his first solo project with Bloodshot, and included covers from Dave Dudley and Johnny Cash, right beside selections from The Dwarves and Spaghetti’s own hybrid country punk tunes.

Enjoy an exclusive stream of The Value of Nothing below.

Pre-Order Eddie Spaghetti’s The Value of Nothing