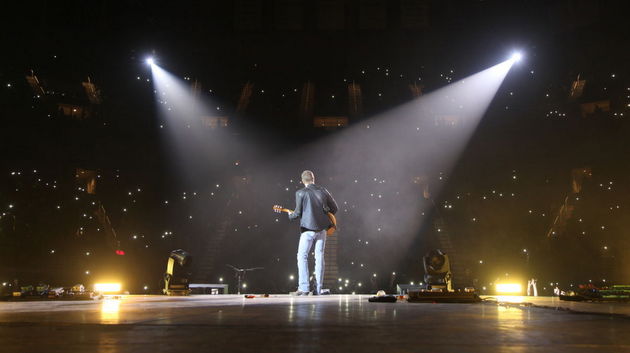 Saturday night saw Eric Church’s “The Outsiders” world tour make a stop in Salt Lake City at the EnergySolutions Arena, but an unexpected stomach virus sweeping through the band and crew had Church calling an audible, and performing the sold out show solo, completely acoustic, with some help here and there from the remnants of his band and crew who were still able to stand upright.

The stomach flu rendered Eric’s crew unable to fully set up the lights and other accoutrements for the show, as well as sidelining some key members of his band. But instead of cancelling the show—which is pretty standard protocol in these cases for a major arena performance—Church, who was one of the few who was spared by the stomach virus, soldiered on. 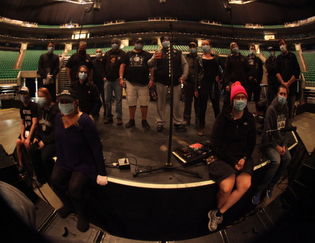 “If you’ve seen our show so far on this tour, you’re probably wondering what the hell is going on right now. Well, so am I,” Church said to the crowd. “Here’s the deal, yesterday we had the stomach flu strike our band, our crew, everyone. We had no one to hang video, lights, nothing. But I’m still here. I’m still standing. We’ve talked about how every show on the ‘Outsiders Tour’ is different. Well tonight, will be the most different one. Shit there’s nobody left, its just me. I’m going to give you everything I got. We have a couple band guys that feel okay to get up and down here.”

One of the reasons a big arena show like Eric’s would otherwise cancel is because of the price people pay for tickets, and the show they expect to receive. Though many of Church’s fans may appreciate an intimate acoustic performance, that’s not necessarily what they paid for. Church’s shows features an elaborate lighting setup, and even a big inflatable devil makes an appearance. But instead of skimping fans by just delivering an acoustic show, Church took it more as a bonus, and still scheduled a makeup show for the date of May 25th when he’ll return to Salt Lake and put on the show attendees expected.

“Here’s the deal – on Memorial Day we’re going to come back and play the full show. I’m not going anywhere, I’m here to play. Its gonna be crazy,” Church said to the crowd. Guitar players Jeff Hyde, Jeff Cease and Driver Williams joined Eric for a few songs, as did Lzzy Hale of the rock band Halestorm for an acoustic version of the song “That’s Damn Rock and Roll.” Halestorm opened the show with a 45-minute set, and apparently the sound crew was mostly spared from the stomach flu too. Church went around to the six different microphone positions on the stage to perform a total of 19 acoustic songs. Though it wasn’t the show the crowd expected, it probably will be a show even more memorable than the one they paid to see.