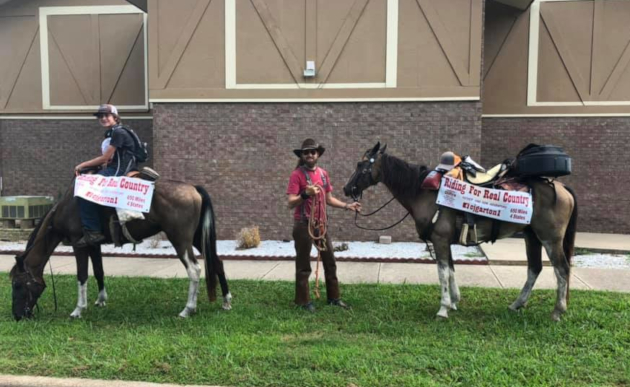 There are a lot of things true country music fans and artists do to express their love for the music, and at times, show concern for what country music has become. Traditional country artist C.J. Garton and his 13-year-old son Clinton Bruce Garton III decided to take a unconventional approach to raising awareness about what is going on in country music, and one that got the attention of quite a few folks along the way. As opposed to taking to social media to post memes or some other exercise in protestation, C.J. Garton and son spent the second half of the summer of 2019 on a 646-mile trip across four states on horseback on what they called “Riding for Real Country: The Ride Back Home.”

Starting in Nashville in July 23rd on their horses Pancho and Lefty, and ending at the family’s farm about 40 miles southwest of Tulsa in Depew, Oklahoma in late August, they brought their message about real country to numerous events and communities along the way, played a few scheduled and impromptu gigs, and drew the attention of numerous local newspapers and television stations.

“We’ve gone through three states, and the thing everyone tells us is they don’t listen to the radio anymore. That breaks my heart, because that is going to kill radio eventually,” C.J. Garton told the Baxter Bulletin in Mountain Home, Arkansas on August 12th as the two passed through town. “Our music industry is a monopoly. If you’re not part of the big conglomerates (that own the radio stations), then you don’t get your music played. We want to give the listener — that person on the other end of the radio — a voice.”

Along their journey, numerous people helped out the pair by offering food and shelter. OilFire Rye Whiskey also helped sponsor the ride, and an Indiegogo Campaign raised money to help make the trip possible and to help make a documentary about the trek. During the journey, the duo rode with banners to help raise awareness for what they were doing. “When we’re riding through towns or on the sides of interstates, people pull over and they want to know what’s going on,” C.J. Garton said. “Going through town, meeting and interacting with people is the best part.”

On August 19th they arrived in Tulsa, and the CBS affiliate was there to greet the pair and interview them about the trip (see below). By that time, the trek had become just as much about father and son bonding time and the inherent goodness in the world that is getting lost in the digital age as it was about country music. “We’ve met so many people that’s helped us,” C.J. told News Chanel 6. “We had people pull over and say, ‘Hey we’re going to put you in a hotel room tonight and buy you dinner!’ And we’re like, ‘What just happened?'”

C.J. Carlton chronicled the journey on his Facebook page where you can scroll through and see daily updates along the way. They got the attention of country music songwriting legend Billy Don Burns who commented, “Damn man that is quite the deal. Be safe out there.“

“The reason why I’m doing this is I want to spend father son time with my boy, and also create awareness for country music the way I grew up loving it and listening to it—songs that say something,” C.J. Garton says. “We have so much division in the world. I think this could bring us together a little more.”

C.J. Garton released a self-titled album in 2018 that is available through all major outlets.