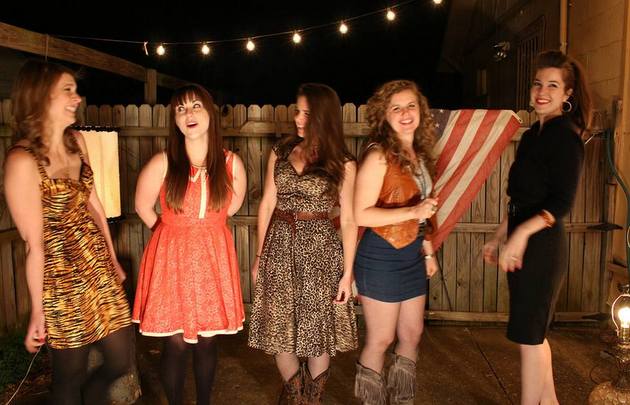 Five beautiful and multi-talented women banding together to break down gender barriers in bluegrass, country, and beyond; that’s the story of the newly-formed female supergroup in Nashville called The Local Memories. It’s all the brain child of fiddle player, Berklee College of Music alumni, and former Outlaw Carnie Lucy B. Cochran. Calling on her Berklee college experience, she recruited fellow attendees of the esteemed music school and the famous wife of Col. JD Wilkes of Th’ Legendary Shack Shakers to take on the roots world with their collective feminine prowess.

The other members of The Local Memories are:

Melissa Wright: Berklee attendee and native of the Blue Ridge Mountains who plays acoustic and electric guitar, and is one half of the duo Mink’s Miracle Medicine out of Harpers Ferry, WV.

Jessica Lee Wilkes: The upright bass-playing gentler half of Col. JD Wilkes, member of The Dirt Daubers, and recently-announced solo artist in her own right.

Named for the old Willie Nelson song, The Local Memories have just released an introductory EP recorded by Andy Gibson in Nashville. The launching of The Local Memories seemed like a good occasion to chat with ringleader Lucy B. Cochran about her strange musical journey so far, and what inspired the supergroup.

So you are a graduate of The Putney School in Vermont, and then you went to the Berklee College of Music in Boston, which is a very distinguished music school. How did you come about attending these schools, and how has it shaped you as a musician?

I started out just going to a normal high school in Middletown, Deleware where I grew up, and it was clear that I had a different learning style from your average individual. Lucky for me I had good parents who were paying attention and saw that I should probably move. So that’s how I ended up at The Putney School. It’s not specifically a music school, but it does tend to have a lot of artistically-inclined kids that go there and they have an excellent music program. My parents wanted me to go to college and I said, “Well, I’m gonna go to music school, are you okay with that?” and they said they were. And that’s how I ended up applying and getting into Berklee. And the rest is history.

When you say your learning style was different, were you struggling, were you accelerated compared to your classmates?

I definitely was struggling both academically and socially. Most of the kids that went to this particular school came from extremely affluent backgrounds. It not that I didn’t have the things I needed growing up, but I was raised a little more down to earth compared to the rest of the kids at that school, so socially it was very difficult for me. I’ve always had trouble in school. I’m a musician. I think most musicians can relate to not wanting to write papers and struggling to focus on things that don’t have to do with music. To the modern day educator, they might think, “Oh, there’s something wrong with her.” But really I had smart parents that saw it for what it was and allowed me to change my course, and that’s how I ended up parting ways with the traditional high school.

So the Berklee College of Music, this isn’t Juilliard, but this is a pretty esteemed class to get into. So through this period you must be excelling as a musician and people are taking note of that.

When I was in high school I was given a lot of opportunities to perform in my various communities. You do have to be pretty good at what you’re doing to get into Berklee and to pass the audition. I was definitely in the right place to develop my musicianship to that level.

And you said when you’re parents wanted you to go to college and you said, “Okay, but I want to go for music.” Was that because there may be a lot of money spent and it may not actually result in making a lot of money back?

I could do a whole other interview on education and my views on college and whatnot. But I did have some reservations about college. The first was that I’ve never been really excellent with academic work. That had me nervous. Even as a tiny little kid I knew what I wanted to do. Music and performing has never been a question for me. That being said, it was definitely good for me to be in a strict, rigorous environment. It definitely shoved a lot of music learning down my throat that I wouldn’t have received otherwise.

I do have an issue with what college has morphed into in this country, and the fact that it’s so freaking expensive and it sets you up for a lifetime of debt. I’m among the lucky few that did not have to take out college loans. If I had to borrow money to go to Berklee, I would be $200,000 in debt right now. I just think it’s a really cruel system, especially for individuals that are going into an artistic field. Furthermore, it doesn’t guarantee you any sort of employment or financial security. And I’m not convinced it necessarily puts you that far ahead of the pack in a job search. All that said, it does put an extra burden on artistic types who are stereotypically already sort of burdened individuals (laughing). I mean the tortured artist thing, I mean it’s real. To have to try to fit into any sort of system when you’re thinking is not systematic, your thinking is creative, it can be just awful for some people.

So we’re talking about Berklee College, The Putney School and all of this esoteric learning, and then all of a sudden, and no disrespect to Bob Wayne and the Outlaw Carnies, but you switch to almost the exact opposite side of the musical spectrum, and decide to trek out across the country in a 30-year-old motorhome with an underground country music band. Tell me the rationale behind this career move?

On paper it doesn’t look like it makes a whole lot of sense, but if you’re into astrology, I’m a Gemini, and that would explain it, in my world anyway. I have two very distinct sides. I’m very adaptable. I really just wanted to get the touring experience. It was the summer after my third year of college that I started with Bob, and I did two full summer tours with him. Basically I was drawn to him because I love country music. I had plenty of people tell me along the road, “What are you doing with these guys, you’re too cute to be with these dirty boys.” And Bob tours really hard. And now that I know I can do that I feel like I can do pretty much anything. The first fiddle teacher I ever had, he used to tour with Hank Jr. So I really wasn’t a stranger to Outlaw country music. I was exposed to it from a pretty young age. My parents are country fans and I’ve always loved it. I had gotten into some of the Muddy Roots bands, and actually at the time his previous fiddle player quit I hadn’t listened to Bob at all. And then I saw that he was looking for a new fiddle player and I did my homework on him. So I wasn’t really familiar with Bob’s stuff, but I was keeping tabs on that whole scene.

I definitely had some nerves going into it because I didn’t know if Bob and his band would accept me, or if we’d have anything in common. Bob can be very warm and welcoming, and be concerned that everyone around him is happy and things are running smoothly. From one standpoint I really admired how he ran his business. When we were on the road, it was a very tight ship that he ran. It was very organized, and I liked that. The lengths that he went to, to be there for his fans at every show and personalize each experience, that was really important for me to see first hand, because I don’t think I had ever been with a band that had went to those lengths to connect with their fan base.

So now you’ve started this supergroup of Nashville ladies called The Local Memories. I’m looking at the lineup, and it seems to make no sense and perfect sense all at the same time. How did it come about?

I had this idea for a long time, pretty much ever since I started playing bluegrass as a kid. Going around to bluegrass festivals, I couldn’t help but notice that as a woman I was definitely a minority, especially from who ends up on that stage. In college I was in a band called Joe’s Truck Stop, and we played old time music, and then I started playing with Bob immediately after that. And I started thinking more and more about this girl band, and going to all of these festivals around the country and there’s a lot of great music, but women are under-represented. I racked my brain for a while thinking this was going to be a huge undertaking. And then one day it just kind of hit me that I know the people that I need to make this project happen, I just need to reach out to them. Some of them I was nervous about approaching, but right away all four of them just jumped on it. That was pretty exciting for me, that they must have seen what I saw in the music world, and wanted to be a part of this.

I started playing when I was eight. I can’t remember when I went to my first bluegrass festival, but my parents took us to some as kids. Then eventually when I was a teenager I started going to more and more festivals on my own, meeting people and doing contests. So I spent a lot of time at festivals. Most notably Clifftop, Galax, Grey Fox, and Gettysburg are all some of my favorite festivals. That was definitely a crucial part of my music education.

And is one of your goals with The Local Memories is to go back to those festivals and give them the female representation, or is it an east Nashville thing? Or a little bit of both?

I would like to make a mark on east Nashville, but it’s much bigger than that. My inspiration is much bigger, and it goes way back to those festivals I went to as a little kid. I definitely see us playing bluegrass, and country, and folk festivals in the future, but that’s not necessarily the end game either.

This is interesting because you paint the picture of little Lucy B. Cochran struggling in high school and having trouble relating to the rest of the world because she only wants to play her fiddle. But you seem to put yourself into these situations that have made you exercise other parts of your brain to do things like organize a band. Is this all part of your maturation process?

I would say you’re pretty much spot on with that. I like to put myself out of my comfort zone at times. And sometimes it’s not always a good thing. I bite off more than I can chew. I take on these massive projects, and then I don’t sleep or eat and I drink a ton of coffee. But I get it all done. So yeah, I am working on managing that left side of the brain a little better.