Finally, The Definitive Cradle-to-Grave Biography on George Jones to Be Released 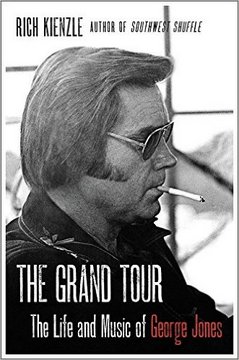 George Jones has never been short on love from country music fans, but his place in the culture at large has never been chronicled to it’s proper stature. Well all of that is about to change with the release of two biopic films, and finally a cradle-to-grave biography on The Possum’s life. The Grand Tour: The Life and Music of George Jones written by music journalist and country historian Rich Kienzle is set to be released on April 1st via Dey Street Books, a division of HarperCollins.

The 320-page biography will cover George’s life from an impoverished childhood growing up in East Texas, being raised by by a devoutly-religious, but alcoholic mother and an often-abusive father, his multiple tumultuous marriages including to Tammy Wynette, his alcohol and cocaine abuse that almost killed him, and his marriage to his fourth wife Nancy.

The Grand Tour will also cover the ups and downs of George’s recording career, his place in country music history, and how he became increasingly frustrated with the wayward direction of country music later in his life. Rich Kienzle is said to have culled through reams of governmental records and archival material for the biography, interviewed producers, musicians, industry types, and friends and admirers of George Jones to be able to offer the definitive story on his entire life. The book also includes eight pages of photos, and will be available in hardcover, paperback, and digital reader versions.

The news comes as two separate movies on the life of George Jones are in the pipeline. No Show Jones written by Alan Wenkus is being produced by 28 Entertainment out of Los Angeles, and a movie focusing more on the relationship between George and Tammy Wynette starring Josh Brolin and Jessica Chastain is also in production.

Pre-Order “The Grand Tour: The Life and Music of George Jones”