Five Feet From Stardom: The Story of Zach Sweeney

“I always tell people that one day my book will be entitled “Five Feet From Stardom.” – Zachary Sweeny

The fate of the sideman in music is one of always playing second fiddle to the big star. But one of the things we love about the other players in a country band is they generally don’t care. Though many times they do an equal share, if not the majority of the heavy lifting for the music, they’re just fine blending into the background. 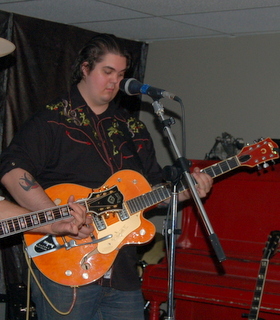 My first encounter with the young, fresh-faced Zach Sweeny was when he was playing with Lucky Tubb at a Halloween show last year at Johnny B’s in Medford, OR. He was on loan from Wayne Hancock’s band and was setting the place on fire. It was one of those moments where you have to tap your neighbor on the shoulder and ask, “Is that kid for real?” As effortless as breath, Zach was raising the ghost of hollow body guitar god Hank Garland, while waylaying the wild crowd decked in their Halloween regalia.

Wayne “The Train” Hancock’s band over the years has been like its own Hall of Fame/proving ground for remarkable guitar players. From the incomparable Eddie Biebel, to James Hunnicutt, to Wyatt Maxwell (of Mad Max & The Wild Ones), Wayne has had some of the best in the business at his side. Zach Sweeny gives up nothing to these players and has become one of the most ubiquitous sidemen in underground country, appearing on albums from Danny Kay and the Nightlifers, working in the studio with Jimbo Mathus, and wowing crowds coast to coast as the anchor of Wayne Hancock’s band.

How old are you?

Where are you from?

Beltsville, Maryland. It’s between Baltimore and Washington DC. It was a great place to grow up playing music because I could play in Washington D.C., Baltimore and northern Virginia. I had lots of opportunities to play and not overexpose my self too much.

Where do you live now?

Who are the current artists or bands that you play with?

At this time I am just playing with Wayne Hancock. He goes out on the road like clockwork two weeks on and two weeks off. I really enjoy touring with him. He lets me shine on every song all night long. It’s a great gig for developing your chops as a soloist and I love every minute of it.

Who are artists or bands that you used to play with?

I have been in so many bands over the years I could not possibly name them all but I’ll name some that were important to me. One band is Danny Kay and the Nightlifers. I’ve played on two of his records Heading Home and Crazy Lonesome Blue. Another band is Retro Deluxe with my friend Bobby Joe Owens. We recorded a record called Watermelon Tea down in Mississippi with Jimbo Mathus from the Squirrel Nut Zippers. I played on Bobby Joe’s solo record Please Rise—Jimbo was also a part of that project as well. Other bands I have played with but have never recorded with are Glenn Moomau and the Blue Flames, who have a standing gig every Friday at Berthas Mussels in Fells Point in Baltimore. Brook Yoder is a really good singer, a traditional Rockabilly band called the Garnet Hearts, and countless bar bands and last minute call when someone cancelled at the last minute.

How did you get starting playing with Wayne Hancock and Lucky Tubb?

Up until a few years ago I only played mostly with older musicians and I made a conscious decision to find younger bands to play with. So I joined Danny Kay and the Nightlifers and The Garnet Hearts. On a trip to Fayetteville, North Carolina with Danny Kay, I met a singer songwriter named Ronnie Hymes. He sat in on a few songs that night and we exchanged business cards. A few months later in July he contacted me and asked if he could pass my number on to Lucky Tubb because he had a tour coming up and his steel player and guitarist backed out at the last minute. I said, “That would be fine” thinking nothing would come from it. About 5 hours later, Lucky called me and asked me if I could do the tour and the first stop was in Eureka Springs, Arkansas at Chelsea’s. All I had to do was get there. Lucky offered me a bus ticket but I didn’t think Greyhound would get me there on time so I drove out in my car having no idea how this gig would go.

At Chelsea’s in Eureka Springs I met a woman named Gina Gallina who happened to be Wayne Hancock’s wife. She filmed me on her phone during the show and sent a video to Wayne. Gina offered to let me leave my car at her house while I was on tour with Lucky. While I was still on the same tour with Lucky, Wayne called me up and said he needed a guitarist pronto, I told him when I finished out the tour with Lucky I would meet him in NC the next day to start the tour with him. Wayne offered me a job after the tour so I took it, but for a few tours I did double duty with Lucky and Wayne. Lucky and I parted very amicably and will play together in the future most likely. That being said I hope to be with Wayne for a long time. I am very proud to be in his band and grateful to Ronnie and Gina for giving me great opportunities.

Who are your primary guitar influences?

I have a lot of guitar influences but one of my favorite players is Hank Garland. I like his tone and note choice. He also was a very in demand session musicians which is what I want to do. Another guitarist that I admire is George Barns. Unlike a lot of people my age, I grew up liking live music and playing in bar bands and I met some very talented musicians in my own area growing up that showed me how to be a well rounded musician. Two of my favorites are guitarist Rusty Bogart and Chick Hall Jr. They are just great guitarists that can play almost any kind of music. Since I’ve been in Wayne Hancock’s band, I have really been studying Paul Skelton and Dave Biller’s playing trying to get all of their nuances, phasing and tones. They are both fabulous players. I also like Junior Brown’s playing a lot.

Who are your primary influences in music in general?

Do you ever see yourself fronting your own band, or do you consider yourself a pure sideman?

I hope to be part of a band one day where everyone is on the same page musically, business wise and has the time and energy to put into something special. If that’s a sideman or front man will depend on how my life turns out. That being said I always tell people that one day my book will be entitled “Five Feet From Stardom.”

Is it true you never drink or smoke?

I don’t drink alcohol or smoke anything. It really is just a personal choice of mine I made a long time ago. I always want to play my best for people. I started playing bar gigs at around 13 or 14 and people would always try to get me to drink with them and I never did, I just never wanted to. People used to say to me “you know that you’ll be 21 one day” or “one beer won’t kill you.” I think I just got tired of sorority chicks and frat boys yelling “Free Bird” and “Mustang Sally” after the band had already played them. Another reason is I have seen what that lifestyle does to people on all sides of the equation, so I keep it out of my life.

When did you start playing guitar, and who introduced you to playing music?

I first started playing bass guitar at age 8. My dad played in bands in high school as a bassist. Before I was born my mother gave him a guitar. Growing up I did not have to ask my parents to buy me an instrument; I was simply able go and get it out of the case when I showed an interest in music. My dad introduced me to music; he was always bringing home new music and learning songs by ear just because he wanted to when I was younger. My father taught me to figure songs out by ear, and sometimes he would show me how a song went, but mostly he would nicely tell me that I was close but not quite right yet. This was great for me, but at the time I didn’t realize it. I would get frustrated sometimes but he never got frustrated with me.

My mother and father really fed my brother and I’s musical interests; my brother plays classical guitar, piano and is a good drummer. When I was twelve my mom found a guitar teacher for me and we got along really well. His name is Bruce Casteel he is a very dedicated musician and a great teacher, I studied with him for a long time. He taught me how to apply what I had learned by ear to music theory and helped me build a classical repertoire. Bruce also taught me to read music and to Travis pick. Around the same time I started attending open mic nights. This taught me to improvise and learn how to play well with other musicians. A few years later I started getting calls for gigs and I started running my own open mics, at one point in time I was running four open mics a week and playing gigs the other nights. I did this until I started going on the road full time.

What type of guitars do you play, through what amp?

My favorite guitar to play is a 1993 Gibson ES-165 Herb Ellis. I like the tone and feel of it. I can do anything I hear in my head with this guitar. My second guitar is a Gretsch 6120. I bought this guitar when I was seventeen years old. It was my favorite till I bought the Gibson but it is a great guitar nonetheless. My other guitar is a Dean Palomino, I bought this guitar so I could have a nice hollow body guitar that I could put on an airplane if need be. My main amplifier is a 1971 Fender twin reverb. I bought it in Austin after my second tour with Wayne because I wanted a nicer amp to tour with. My backup amplifier is a Reverend King Snake amp. I have had it since I was fifteen. I don’t like to use pedals. I prefer to get all my sounds by picking technique and manipulating the knobs on both the guitar and amp. But if I need to use an effect pedal to get the right sound I am not against it, I just prefer to play straight into the amplifier.

Where would you like to see yourself in 20 years?

Hopefully in twenty years I’ll be playing music for a living. Ideally I would be a studio musician playing on lots different kinds of projects in all genres of music, but I love going out on the road. I would be happy if I could do both studio and live work equally for the rest of my life.