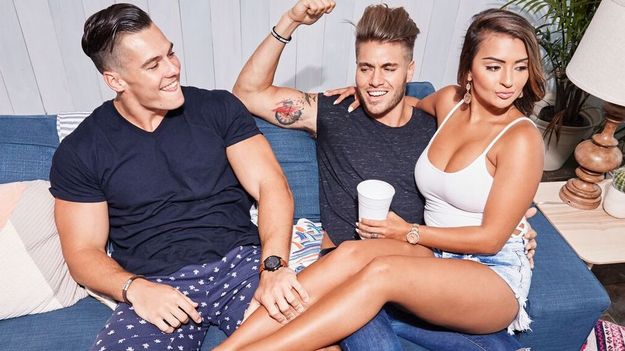 Well well well. We thought we were over all of this dumb shit when CMT finally canceled its exploitative series Party Down South amid rape allegations, cast members leaving the show due to safety concerns, multiple arrests for DUI, theft, and back owed child support, let alone the rampant STD infestation on the set (probably). But CMT’s parent company Viacom is back with another abominable mischaracterizing of Southern culture called Floribama Shore, set to premier on MTV November 27th.

Sort of a mix between Party Down South and the original Jersey Shore, it puts eight 20-something party animals into a house together in Panama City Beach, and fuels the party with plenty of booze and stupidity, trying to sell it all as something resembling an accurate portrayal of Southern living.

Viacom first tried to soft peddle the idea by saying Floribama Shore “captures the very real thrill and angst of being young and trying to figure out the future with a group of people you’ll come to call family.” But of course as the previews emerged, it was the same salacious, wild-ass circus all of these stupid shows look to capture for shock value at the expense of the people and locations they portray. The cast of the new show is Gus Smyrnios (22), Jeremiah Buoni (22), Candace Rice (24), Aimee Hall (24), Nilsa Prowant (23), Codi Butts (25), and Kortni Gilson (21).

Even before the first episode aired, the show was stirring controversy. The Flora-Bama Lounge, Package and Oyster Bar near Pensacola says it was initially approached by MTV in 2013 about the idea, and for permission to use the name, which Flora-Bama refused to grant. That is likely the reason for the slightly-different “Floribama” spelling of the new show.

Flora-Bama, which regularly hosts live music and is a well-known tourist destination, released a statement, saying “We’ve recently learned that MTV and Viacom are using our name and reputation to promote their latest ‘reality’ series, after approaching us in 2013 about the same. We’ve asked them to stop. They’ve refused.”

Since MTV approached Flora-Bama preliminarily, it seems they knew about the name and wanted to piggy back off of it, so playing ignorant will probably not be a winning strategy if the matter ends up in court. Party Down South also ran into local trouble when production wanted to set up shop in Pensacola for Season 2. Hotel spokesman Julian MacQueen told USA Today. “All you have to do is watch a trailer of the reality show and realize it will undo everything we’ve been trying to put together. It sure puts a stereotype out there, and it’s the lowest form of entertainment.”

Floribama Shore isn’t just another battle for those looking to push back against negative Southern stereotypes, it’s also an old idea being rehashed in a new location. Hopefully its life span remains limited.