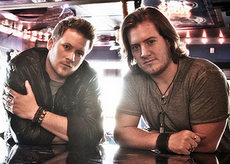 Arguably yes, because music charts aren’t always the best gauge of cultural impact, and you can certainly question the validity of “Cruise” as a country song to begin with. But all qualifiers aside, “Cruise” has now spent longer at the #1 position of Billboard’s “Hot Country Songs” chart than any other song in that chart’s 70 year history. 22 weeks, and counting. The distinguished names that populate the longest ever #1’s include Hank Snow, Webb Pierce, Ray Price, Eddy Arnold….and Florida Georgia Line, and Florida Georgia Line now holds the trump card above all of these Country Music Hall of Famers on the charts. In fact you have to go all the way back to 1961 to find another song that held the #1 position for more than even 8 weeks.

Looking at the chart below of the top ten longest charting #1’s in the history of country music, the legendary names and songs Florida Georgia Line will now forever be ahead of, and how long it has been since a any song has entered this chart, illustrates just what a historic anomaly Florida Georgia Line and “Cruise” have become.

Simply put, “Cruise” is a behemoth, and there’s no reason to think that just because it now holds the distinction of being the longest-charting #1 that it will simply fade into the sunset. And the song’s success is not just confined to chart performance. Sales wise the song is on its way to being certified 5-times Platinum, with 5,100,000 songs sold at last count—an astronomical number considering this feat was accomplished in the blossoming of the free download/streaming age of music.

So what does all of this mean?

You can almost guarantee that Florida Georgia Line will win “Vocal Duo of the Year” and “Single of the Year” at next November’s CMA Awards. And now they have to be considered nominees, if not front runners for “Album of the Year” and the prestigious “Entertainer of the Year” award. The ACM Awards a few months later might be a similar case, barring another breakout superstar trumping Florida Georgia Line’s success. And don’t just look at them as the story of one song. Their 2nd single “Shine On” had some impressive commercial and chart success, and their 3rd single “‘Round Here” is already #7 on Billboard’s Hot Country Songs chart and rising. Their album Here’s To The Good Times has also now claimed multiple weeks at #1 on Billboard’s Country Albums chart. Florida-Georgia Line is winning the day in all sectors of country music right now.

Scott Borchetta has done it again.

Once again, the “Country Music Anti-Christ” has taken a virtual unknown all of the way to the very top of the country music mountain. Just like he did with Taylor Swift, he took a chance on an unproven act, and it has paid off in spades. In fact one irony about all of this Florida Georgia Line success is that it in many ways is outshining Taylor Swift. Certainly “Cruise” is, selling almost 2 million more songs than Taylor’s biggest single “We Are Never Ever Getting Back Together” from her latest album, and “Cruise” is continuing to sell at a faster pace. Florida Georgia Line isn’t just the king of the hill, so is Scott Borchetta and Big Machine Records. They are on a massive winning streak that is showing no signs of ending soon.

They’re rock, they’re country, they’re hip-hop. Add some of their remixes, they could even be considered to touch on the fringes of EDM. Florida Georgia Line is all things to all people, and if you were looking for one band to symbolize the emergence or arrival of the mono-genre, it would be them. Has Billboard’s new chart rules aided in the success of “Cruise” and Florida Georgia Line? Of course. But don’t discount the commercial and cultural impact of this song and band either. For all we know, “Cruise” may have shattered this #1 Billboard chart record without the help of the new rules. It has sold that well, and stayed strong for that long.

When Billboard’s new chart rules went into effect boosting the chart performance of songs like “Cruise,” Saving Country Music put its full resources behind an attempt to persuade Billboard to reconsider some of its decisions. Much of this effort was met with apathy from music fans, including this site’s readership. At the time my assertion was this could completely re-shape the country music landscape, and result in the re-writing of history books like we now see with “Cruise.” The song trumping legacy recordings from Hall of Famers is the reason this issue mattered. Now by complaining about the rules, we look like sore losers. But nonetheless, the advantage “Cruise” had over classic country recording because of plays in the pop realm is one of the reasons we are seeing this anomaly.

At the same time, we also cannot discount the cultural impact of this song. There are songs that have sold more copies over the years in country, but not in a period like this where consumers are streaming songs more and more instead of buying them, and the whole music industry is in a recessionary environment. There also has to be another big song that resonates with music fans to knock a #1 out of that spot, and as of yet, we have not seen that song. Just as much as Florida Georgia Line has benefited from the new chart rules, so could another country crossover song and knock it out of the top spot. #1 songs are judged by their peers at that given point in history, not by the history of the genre. If anything, the success of “Cruise” also speaks to how country music at the moment is failing to produce songs that resonate with a wide audience, and just how much “Cruise” does resonate.

Florida Georgia Line is no longer the next big thing in country music, they are the big thing, period. And this isn’t their high water mark, this is their foundation.