Samantha Crain emerges from Shawnee, OK with her 3rd full length offering and 5th release overall called Kid Face–a delightfully sparse project, but deliberative and in-depth in its forays into the mind’s inner dimensions and ulterior tendencies. Kid Face is despondent by nature, but prone to tangents of frolicking melodies that pull you into the project to later get lost in its complexities.

A Ramseur Records affiliate, Samantha has already proven her worth many times over in creating choruses that rise to catch the ear. The opening track “Never Going Back” belongs in this category; a tale of jilted love that could be categorized as the “We Are Never Ever Getting Back Together” for the rest of us. The fun and swaying “Somewhere All The Time” is also a simple listen, but from there Samantha seems mostly bored with making her songs so easily entertaining, and challenges herself and the listener by creating superfluous amounts of space, and then filling it with very little but tasteful, thoughtfully-placed tones and sincere expressionism. 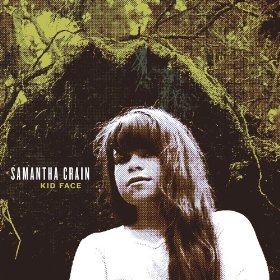 In the song “Taught To Lie” Samantha introduces a sultry new persona with a quivering, patina voice, and words about the nature of lies that flow like a long black dinner dress. “Late in the night, I’ve learned to tell the truth … sometimes.”

From there the context of Kid Face falls into more abstract structures as much akin to Radiohead as anything else, though no less infectious than a conventional approach when given time to grow on the brain matter. Crain’s style is folky, with rock and country tangents. But mostly it resides in a non-genre-specific singer/songwriter style that allows the music to remain non-confined.

The lost and depressed “The Pattern Has Changed” and its breathing, un-muted piano breeds fierce condolences in the listener, as does the very personal “We’ve Been Found.” The 5 minutes of “For The Miner” go by fast from the penetrating bass beat. Rhythm tends to trump improvising in Kid Face, wishing to leave the artistic expression in the hands of the words and arrangements. Samantha’s studio collaborator, the analog-savvy John Vanderslice, compliments Crain’s “simple, yet complex” approach.

Kid Face reveals some of the darkness in Samantha Crain that we may be able to look back through her career and see hints of, but was never revealed in full until now, without completely losing the playful, cherubic nature of her form and style. And one would be remiss for opening up a discussion on Samantha Crain without mentioning her voice, which seems to be the whole reason for the music in the first place–the thick, annular tones that so eloquently cleave all the harsh edges off the English language and leave only a curved, supple texture pleasing to the ear.

Some of the feyness of Kid Face make keep some listeners at arm’s length, while those that venture near will be pulled in tight.