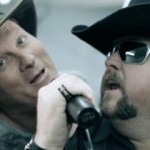 Kevin Fowler, you are dead to me.

I followed you for a while as a cool songwriter from my home state of Texas, but your flirtations with selling out to the corporate music machine have now gone way past heavy petting with pop country, to dirty sex with the man who would kill country music if it meant keeping him flush in chicken and biscuits.

When Taylor Swift won the CMA for Entertainer of the Year in 2009, we thought it could get no worse. We also thought that when Sugarland put a reggae break in a song, or when Jason Aldean covered a Colt Ford rap, or when Trace Adkins took a stupid urbanism and turned it into the premise for a whole song, or when Arron Lewis took the same Staind song that’s been rehashed a dozen times and called it country. But still they spiral continues downward. The formulas get even more stale, the lyrics get even more condescending, until Taylor Swift looks like the median of quality, or maybe even the high water mark that all the other refuse on mainstream country radio falls in line behind.

The latest new low is this “duet” by Colt Ford with the aforementioned Kevin Fowler called “Hip Hop in a Honky Tonk.” You can probably guess the premise. 2011 might be the year that the two 2 super-genres of hip hop and country merge into a mono-genre as I’ve predicted, as the lost and creatively bankrupt music industry continues to contract, offering no contrast, no creativity, and no choice. What could be a finer example than this:

I haven’t talked much about Colt Ford up until now. My policy before was to stay out of his way and let him fall on his own sword as an obvious sideshow and flashbulb craze. But unfortunately, Kevin Fowler and Jason Aldean, in a shameful attempt to make their own stars burn brighter, have added a level of legitimacy to his name. What really got me was this line from the song:

Now what do you think old Hank would say, It would kill him if he was still alive today

I’d bet money that he’s rolling over in his grave, ’cause Hank sure as hell didn’t do it that way.

In the context of the song, Colt is acknowledging that Hank Williams, who is the one man most responsible for making country a relevant music genre, would be appalled by the mixing of country and hip-hop, and ended it with a play on Waylon Jennings’ song “Are You Sure Hank Done It This Way,” an anti-Nashville song about how the country music industry has lost its way. In other words, Colt is transgressing the traditions of country with this song, then acknowledging that he is transgressing them, so he can’t plead ignorance. Then he mocks these traditions, and then mocks anybody who would defend them from people like himself.

I know some will say, “Hey, this is all a big joke.” Well pardon me if I don’t laugh as my culture is being trashed for commercial gain.

And why does country always have to be the submissive genre when country and hip-hop collide? Why can’t it be honky tonk music in a hip hop bar? I’ll tell you why, because hip hoppers have more self respect than this, and would bust a cap in any project before it could make it to mastering.

I don’t understand what is going on here. Why is this lowly little blog the only place where sheer mortification for this garbage lives? This is our culture ladies and gentlemen, and it has been stolen from us. It has been ripped right out of our hands, and used, exploited, trashed, and now thrown back in our faces as they mock us for caring about it.

Where’s the outrage? Where are the voices of dissent? Where is Hank Williams Jr., Jamey Johnson, Miranda Lambert, or George Strait? Why are they afraid to come out and state the obvious, that this is an abomination? Where is the Charlie Rich of 1974 that took a lighter out and burned the envelope naming John Denver as the CMA Entertainer of the Year? Are they just unaware, or are they too afraid to put their own asses on the line for fear this is where all music is going and they don’t want to be the ones at the party without a chair when the REAL music stops?

We need someone standing up to this that has a bigger megaphone than me. We need assholes crashing Colt Ford shows and heckling his ass between songs. We need Hank Williams reinstated to The Grand Ole Opry. We need to draw a line in the sand or next week the song I roast will be yet another step worse. This is OUR music, the people’s music. And if this trend continues, all that will be left is our memories and a few mp3’s and some dusty old records.