Frank Newsome’s “Gone Away With A Friend” (A Review)

Two years ago almost to the day, notables from the bluegrass and country music community such as Ricky Skaggs, Vince Gill, Patty Loveless, Larry Sparks, and Jim Lauderdale traveled up the Carter Stanley Highway to near the tiny town of Smith Ridge, Virginia to bury iconic bluegrass legend Ralph Stanley.

Many spoke and performed at the ceremony, including some who now reside in the Country Music Hall of Fame, and others who carry incredible musical legacies. But aside from the man who was being remembered, the individual who arguably made the greatest impact on the throngs assembled and those who watched via a live stream, was an Old Regular Baptist preacher named Frank Newsome. Unassuming at first, and looking like he’d been permanently affixed behind a small town chapel podium since 1960, his stature beside such famous names and faces seemed a little conspicuous.

And then he began to sing.

The power with which Frank Newsome’s voice rang out across the assembled mourners was something hard to keep your breath in the audience of, while goosebumps freckled your arms. It was like nothing you had ever heard, but at the same time, it was the most familiar and natural noise you’d ever experienced. Similar to shape-note singing, but more accurately described as lined-out hymnody, the power with which Frank Newsome delivered his musical eulogy to Ralph Stanley was something for the ages.

A decade before, Jim Lauderdale—the son of a Southern preacher himself—was performing at the Hills of Home Bluegrass Festival at the same location, when Ralph Stanley brought Frank Newsome out on stage to sing. “There, alone on that stage, Frank Newsome sang ‘Gone Away With a Friend,'” Jim Lauderdale recalls. “On many levels it was the most powerful, spiritual, mournful, emotional, beautiful, and hopeful things I had ever heard. This music comes through Frank from a different, bigger place.” 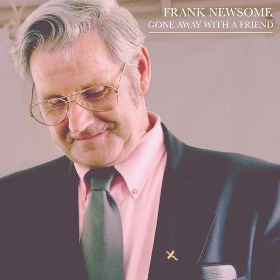 It blew Lauderdale away, and after this experience, Jim and Virginia State Folklorist Jon Lohman resolved to make a recording of Frank Newsome’s line hymns and spirituals, which they did in 2006 right there in the Little David Old Regular Baptist church in tiny Haysi, Virginia, where Frank holds congregation every Sunday. The Old Regular Baptist religion forbids the use of instruments; that is why Frank sings a cappella.

One of 22 children, Frank Newsome did play guitar in his late teens and early twenties, performing songs from Hank Williams and the Stanley Brothers in the early 60’s with his brother while they worked in a sawmill. Like so many from the region, Frank eventually ended up working in the coal mines, giving 17 years of service to the trade until two rock fall injuries and the black lung disease did him in. Too addled to do anything else, Frank Newsome turned to preaching.

The simplest way to describe Frank Newsome’s Gone Away with a Friend is to imagine Ralph Stanley’s rendition of “O Death,” amplified by two, and multiplied by twelve. On the surface, this may seem like a listening experience that would ultimately become tedious, but the exact opposite is true. Listening to Frank Newsome sing with zero accompaniment is trance-inducing, immersive, cathartic, haunting, and most of all, transformative.

People love to use words such as “masterpiece” and “pure” when referring to music, which are hard to logically justify. But with Gone Away with a Friend, these accolades are hard to argue against. Of course your heart must be open to these type of primitive expressions, and the willingness of the audience to listen and let Frank Newsome into their soul is likely the music’s biggest adversity. But pure and flawless is exactly what it is, not as words of flattery, but in the actual study of the performances, like a figure skater who doesn’t let a single flaw enter into their routine.

And yes, this is religious music. But whether you’re a believer or not should be a superfluous concern to your ability to let the music for Frank Newsome into your heart and soul. So often we lump special importance on preserving parts of the world that hold either historical significance, or that have been unblemished by modern man’s touch. The music of Frank Newsome should be approached similarly—celebrated, honored, as revered as unspoiled. And not just because it is so unique, but because it’s the last of its kind. When Frank Newsome goes to meet his Lord and Savior, so will his music.

Until then, it should be cherished, and thanks to the foresight of Jim Lauderdale, Folklorist Jon Lohman, and Free Dirt Records, it has been preserved. Because in our past is a little part of all of us, and Frank Newsome is one of those few pure souls untouched by time, and unsoiled by modern sin who helps us remember who we are, and where we came from. He’s not inspired by the roots, he is the root, and the branch where modes of modern roots music bud from.

Purchase Gone Away With A Friend from Free Dirt Records