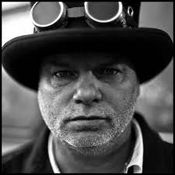 Fred Eaglesmith puts fresh-faced country music interlopers riding a popularity wave in their place in “Johnny Cash,” a song off of his 2012 release 6 Volts, and whose new video was just released this month. Eaglesmith chides the brittle, shallow understanding of Johnny Cash that starts with his American Recordings era, but overlooks his prolonged career struggles, and Johnny’s well-documented and deep religious devotion.

When the prevailing image of Johnny Cash in culture is one of him flipping the bird, the argument can be made that it’s the wholesale reduction of a man of such towering accomplishments and time-tested faith. At some point the imagery and cult-of-celebrity of Johnny Cash trumped the man himself, and society lost sight of his greatest contribution: his noble and charitable spirit.

Fred Eaglesmith is a Canadian-based singer-songwriter whose been touring and releasing albums for going on 35 years. Known for his banter between songs when performing live, he can be a great storyteller, as well as a social advocate in a similar vein as James McMurtry or Steve Earle. Eaglesmith’s subjects mostly rage from canonizing the mechanized world in songs about trains and tractors, to the tribulations of the family farm. The album 6 Volts is a stripped-down, lo-fi affair, with “Johnny Cash” capturing a very Neil Young & Crazy Horse vibe.

The message of “Johnny Cash” is pointed and poignant, but to play devil’s advocate, it’s also a little presumptuous to assume some Cash fans whose knowledge of him is more recent still don’t have a sincere understanding of the man and his music. Some of those Cash fans may have not been born in 1989, and is it a bad thing if heavy metal kids find themselves being drawn into Cash’s music, and country music by proxy?

It is if they do it from the rawness of the imagery or from his most recent burst of popularity that fails to fully encompass his entire body of work. That seems to be the lesson of “Johnny Cash.”