From Homeless to Hank3: The Story of Ray Lawrence Jr.

When Hank Williams III released 4 albums on September 6th, the volume of material he dropped in one day wasn’t the only thing unprecedented. The album Ghost to a Ghost included a track called “Ray Lawrence Jr.” a collection of two live songs recorded in the back of Hank3’s bus in Arizona with the singer/songwriter the track is named for. Sure, country artists cover each other’s songs all the time. But this wasn’t Hank3 covering Ray Lawrence Jr., this was Ray Lawrence Jr. singing his own material, and Hank3 and his band backing him up. And then instead of naming the tracks the name of the song, Hank3 simply called them “Ray Lawrence Jr.” solidifying that this relatively-unknown 48-year-old songwriter’s stock would immediately shoot up amid the album’s release.

The first song on the “Ray Lawrence Jr.” track is “When You Lose All You Have.” They say to write it, you have to live it, and Ray wrote the song while living in a Phoenix homeless shelter. A truck driver and a divorcee, Ray had reached the end of his rope in 2008, and penned the song as a self-portrait. Ray was simply a Hank3 fan, and had developed a rapport with him over the years, often hanging out with Hank on his bus during the Arizona stops. “Just keep writing, keep writing” is what Hank3 encouraged Ray to do. Never could he imagine his songs would end up on a Hank3 record, and being performed by himself.

Ray first found out about the track when his friend and frontman of Arizona-based band Junction 10 called him on the phone and said he’d heard his songs being played on Shooter Jennings’ Satellite radio show. Now Ray has people from all over the world requesting his music. He has just released a new album called Raw & Unplugged that is up on CD Baby, and will be carried in CD form by Farmageddon Records. Ray was kind enough to talk to be on the phone about how he went from homeless, to a happening recording artist.

Triggerman: Who is Ray Lawrence Jr?

Ray Lawrence Jr.: Well for starters I was raised in southern California about 3 hours south of Bakersfied, and of course that was back when Johnny Cash was living out in Casitas Springs. Started getting into playing music when I was about 5 years old, mostly singing. I didn’t pick up an instrument until about age 14 when I started playing guitar, and that’s when I really started taking it serious. Country music was always a big part of it. I got to playing clubs in the military, I played overseas, and later I became a member of a band, Jimmy Dale and the Desperados in the early 90’s. Did a bunch of other stuff and then came out here to Arizona. Then I met Bobby Perez, he had a band called I-10 West, then that kind of ended and formed Suicide Driver. Then that evolved into Junction 10, and I wrote a couple of songs that ended up on their CD, including “Back In The Day” which is also on Ghost to a Ghost. 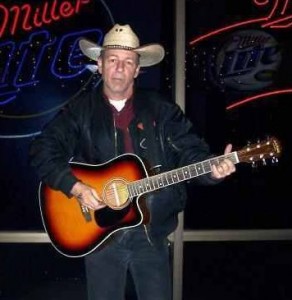 Triggerman: How old are you?

Ray Lawrence Jr.: I’m 48-years-old. It took me a long time to get to this point where I’m getting songs out. I’ve known Shelton (Hank3) probably since ’03. I talked to him online a few times before that in ’02 and I got to know him, and he got to know me. I covered his song “Cecil Brown” on a compilation disc in 2004 that was for the members of the Hank3 message board. That kinda got me to the point I am now. I talked to Shelton on his bus one day and he said, “Man, you gotta write every day.” He got onto me about it. He’s been a great inspiration in my life here, and now he’s helping me out putting my songs on one of his CD’s.

Triggerman: Tell us about the actual songs that make up the track “Ray Lawrence Jr.”?

Ray Lawrence Jr.: The first song on the track is called “When You Lose All You Have”. I wrote that when I was living in a homeless shelter, but we recorded those songs on the bus, and that was about 2 years ago. We recorded it on the same famous Korg D-1600 he recorded all those albums with. A year after that he said, “Well I’m gonna record your songs, I’m gonna send you out a file.” And I went through the whole process of downloading it and converting it so I could listen to it and I said, “Wait a minute, I’m singing on this track and Hank3 is singing backup harmony.” I though these were the scratch tracks, right? Then I was taking a little nap here and I get a phone call from Bobby Perez of Junction 10 saying, “Hey man, Shooter Jennings has played your stuff on the radio.” I said, “He what?” It was about 1:30 in the morning. He said, “Those tracks you let me listen to? You’re singing.” And I thought, “You’ve got to be kidding me.” I thought he was going to cover my songs, not me singing them with his band backing me up.

Then I sent Shelton a text about 2 or 3 days before the show here in Tempe, and he texted me back, “Hey, you are going to open for me in Tempe, right?” Then the day of the show he texted me to be there at 5 for sound check, and I though, “Oh, this thing just got real. I’m on this Hank3 CD and now I’m going to be opening the show. I’ve finally arrived.” This is the dream I’ve been dreaming and now I’m finally able to be a part of it.

Triggerman: So you wrote this song living in a homeless shelter. How did you get there?

Ray Lawrence Jr.: I’ve spent 23 years messing around with trucks, driving during the day, playing music at night. Then I had custody of my two daughters for a while. Then the economy went nuts, I had to go back driving a truck, then one thing led to another, I let the kids go, one went to my folks and one went to my ex in-laws, and I went to work for these guys but it didn’t work out. Then I was back to square one, I didn’t have any money, I had to give up my apartment, so then I had to go to a homeless shelter and I said, “OK, it’s the end of the world now.”

So then I said I might as well do what I do best, play around with some music and write some songs. Music has saved my life more than once. I’ve always had my music to fall back on. Some people have to fall back on a regular job. Something goes wrong for me, my music is the thing that pulls me out. When I wrote “When You Lose Everything You Have”, I realized you can lose your house, your car, your clothes, everything you got possession-wise, but if you lose love, you lose everything. You don’t have nothing if you don’t have love. You can always get the material things back. But if you lose that love, that’s all she wrote.

“Back In The Day” was written about 6 year ago. I was driving over Grand Ave. in Phoenix and there happened to be a train as I was listening to a train song by Johnny Cash on the radio, and I thought, “I’ll write a train song too.” That’s the second song on that track.

Triggerman: So now that Hank3 has recorded some of your songs, what are your plans from here?

Ray Lawrence Jr.: We’re quick like a bunny rabbit and turned around and made a CD, and it’s out, it’s called Raw & Unplugged. I couldn’t think of a name for it, and it’s just me and my guitar, so I though that name worked. I brought 25 CD’s to the Hank3 show in Tempe, gave one to Shelton, and one to someone else, and sold all the rest. I’d never sold that many CD’s at a show before. We’re also looking for a booking agent so I can get out there.