Garth Brooks, Carrie Underwood, & the CMA Entertainer of the Year 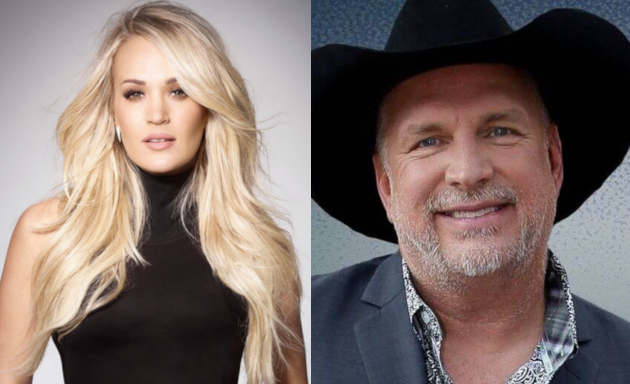 On the day after the CMA Awards, it’s always important to take a deep breath, and remind yourself, “It’s just the CMA’s.” There’s a reason that Trent Reznor is now a CMA winner, yet Dwight Yoakam and Rosanne Cash never were. It’s because the CMA Awards ultimately symbolize a snippet in time and not the substance of an artist’s entire career. Sure, the CMA’s can carry a weight of importance, and can be really meaningful to their recipients. But Dwight Yoakam and Rosanne Cash did very fine without their assistance, and so will others who never get their mantle piece. If anything, it’s the CMA’s that are injured by the glaring holes and miscues on the roster of recipients, not vice versa.

But it does feel important to address what turned out to be the biggest controversy Wednesday night, which was Garth Brooks winning Entertainer of the Year over the performer that many presumed and predicted would be the winner, including yours truly. That of course being Carrie Underwood. This would have been the perfect ending to the CMA’s presentation celebrating women this year. Instead, it was seen as the evening’s greatest offense. And as is achingly predictable, the media has pounced on the opportunity to say once again that country music is a misogynistic institution with little clarity or context.

But let’s take a step back, take a deep breath, and look at the bigger picture. The 2019 CMA Awards crafted their entire presentation around women. Luke Bryan, Florida Georgia Line, Sam Hunt, Kane Brown, Kenny Chesney, Jason Aldean, and others were left completely off the stage, despite being some of the biggest names in mainstream country at the moment. Meanwhile, women like Reba McEntire, Dolly Parton, Martina McBride, and others who haven’t been radio relevant for years, and independent artists like Brandi Carlie and Amanda Shires were given opportunities. Jenee Fleenor won for Musician of the Year, which was the first time a woman has won that award ever. Kacey Musgraves won Video of the Year for “Rainbow.” Ashley McBryde won New Artist of the Year, and gave the best speech of the night. And Maren Morris won for Album of the Year, which is is one of the biggest awards of the night, and the second year in a row it’s gone to a woman.

Carrie Underwood winning Entertainer of the Year would have been the great storybook ending the 2019 CMA’s were looking for. But it didn’t happen. Ultimately, there is a voting population for the CMA’s, and that voting population chose Garth. But that doesn’t mean that the women of country “were all but forgotten,” as Rolling Stone Country insultingly asserts in the subheading of their encapsulation of the night. Sorry, but this country fan won’t forget Ashley McBryde’s speech, the performances of the women on that stage, the Kacey Musgraves wins, or the fact that in 2019, we saw the return of Reba, Dolly, and so many other legendary country women to the CMA stage.

It’s an important role of the media to make sure the public doesn’t forget important moments as opposed to bemoaning the fact that more performers didn’t make divisive and politically-charged statements that would have done nothing more than made America tune out as opposed to pay attention to this presentation celebrating women. Once again, certain members of the media are diminishing the successes and achievements of women in country to prop up an ideological argument, as opposed to celebrating victories and opportunities the women of country enjoyed during the 2019 CMA’s.

The truth is, if Entertainer of the Year is regarded as a touring award—which it has been more and more over the recent years—then Garth Brooks probably deserved it. When Reese Witherspoon handed out the award Wednesday night, she went out of her way to emphasize how touring is now a significant factor in the award. This is one of the reasons Saving Country Music predicted the race for Entertainer of the Year was between Garth and Carrie, not Carrie and Eric Church like some believed. This was Garth’s award to lose to Carrie due to the emphasis on women at the 2019 CMA Awards. It just ended up not happening that way. And if we’re being fair, Garth Brooks was probably the most country of the nominees. But unlike a lot of her pop country contemporaries, Carrie Underwood has always respected the institutions of country.  And most importantly, Carrie was the artist what would most benefit from the win. For Garth, this is just another trophy.

But Entertainer of the Year has not always been a touring award, and that is what is leading to some of the acrimony over the recent winners. When Loretta Lynn became the first woman to win the award in 1972, touring wasn’t a factor in that decision, same for Charley Pride who won it the year previous. Touring wasn’t even a major factor in country awards until the 80’s when artists like Randy Travis and Hank Williams Jr. opened up the music to the arena level that previous had only been reserved for rock.

It’s sad to say, but when George Strait won the CMA for Entertainer of the Year in the aftermath of his massive farewell tour in 2013, that is when touring appeared to become the predominant factor in the award, and was used to justify King George’s trophy. The year previous, Blake Shelton won Entertainer of the Year almost primarily off his work on The Voice. In 2010, long-time Carrie Underwood CMA Awards co-host Brad Paisley won Entertainer of the Year, and at the time the consensus was that it was “Brad’s year,” even though he wasn’t the biggest name in touring, sales, or radio at the time. 2019 was supposed to be “Carrie’s year” under that same pretense. But it wasn’t meant to be.

If Entertainer of the Year is now mostly, or solely a touring award, and the winner is preordained with the statistical certitude of touring purses where you can figure out the winner with a calculator like the Billboard Music Awards, then perhaps they should change the name, or underscore this more adamantly. Because even though this aligns with near history, historically, touring is not what Entertainer of the Year was all about. It was about who had the greatest cultural impact in country music. And if that’s the case, Luke Combs should have won in 2019, or perhaps Kacey Musgraves. But neither were nominated.

But the biggest offense Wednesday night didn’t even seem to be that Garth Brooks won. It’s not his fault that the CMA voters turned out for him over Carrie Underwood. It’s that Garth seemed completely unaware of the moment he was standing in the midst of, and didn’t even mention Carrie Underwood in his acceptance speech, or the women of country who were the centerpiece of the presentation. He mentioned Luke Combs and Reba McEntire, and Kelsea Ballerini, who did have one of the better performances on the night. But he didn’t mention Carrie Underwood—his fellow nominee who was standing feet from him, and had been telegraphing for months that she wanted this award more than anything.

In fairness to Garth, the weight of moments can muddy the brain’s perspective. He did talk about Carrie in a recent “Studio G” Facebook session, and maybe he’s kicking himself for forgetting Carrie today. But Garth could have suppressed a ton of drama, and turned the emphasis back to both Carrie Underwood and the women of country in the final moment of the 2019 CMA’s, and failed to. And it wouldn’t have been without precedent.

Those dragging Garth Brooks today are forgetting that he’s been one of the outspoken people on the lack of women in country. But even more so, he has played the humble guy in his career on numerous big occasions in a way he failed to do Wednesday night. When Garth Brooks was voted into the Country Music Hall of Fame in 2012, he first tried to turn it down, insisting Randy Travis and Keith Whitley should go in before him. And if you think that was just a marketing ploy, Garth Brooks actually did turn down an award. In 1996, he won Artist of the Year at the American Music Awards, and in his speech he refused to accept it, believing Hootie and the Blowfish deserved it more.

Later backstage, Garth Brooks said, “It wasn’t fair for me to walk away with that award. Maybe a year or two ago when we had a really good year. But I’ve been around [the country] talking to retailers … and every one of them credits Hootie [& the Blowfish] for keeping them alive in 1995 and I couldn’t agree more. So I thought that’s who should’ve won.”

Interesting now that here 23 years later, Hootie and the Blowfish have become a “country” band, and Garth Brooks is still winning some of the biggest awards in all of music. Perhaps his AMA speech was just a way to bring more attention to himself. But regardless of what anyone thinks of Garth or his music, he’s always at least tried to appear humble in his successes. And that was what was a little shocking with how he ended the 2019 CMA Awards.

But let’s not let one award overshadow what happened for the women of country over the entirety of the night. This hard line stance that unless women win all the awards, it’s a disappointment and an act of sexism is doing nothing to further the cause of women in country. It erodes consensus behind the idea that there is a problem with women representation in country in the first place. It makes it appear that nothing will ever be enough, and this is more about evening scores and tearing down men as opposed propping up women, which for some, it very much is.

By the current rules and guidance that the CMA Awards give for Entertainer of the Year, Garth Brooks probably deserved to win. But the bigger question is if this is what the country music community wants from the Entertainer of the Year award moving forward. Was Garth Brooks really the biggest personality in country music in 2019, or Keith Urban the year previous? Did giving these guys awards benefit country music? Changes should be made to make sure whomever wins, if feels more like a universal celebration and consensus as opposed to a general letdown due to misunderstanding of what the award means, and who most deserves it.