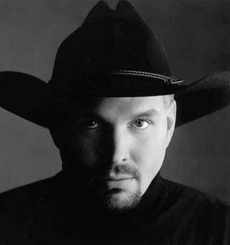 “And the thunder rolls…”

We’ve all been wondering how rusty Garth Brooks would be after 13 years of retirement, and if he would try to emulate the young pups once he was back on the stage. Well Garth Brooks looked a little shaky when he took a spill over the weekend during one of his many comeback shows in Chicago, doing his best Luke Bryan rendition of losing his footing while bounding off a riser, going into a Garth Brooks chub roll that he tried to make look like a football drill or commando maneuver before stopping himself mere inches from falling off the ledge. Garth may have not gone over, but his black cowboy hat did. It was later recovered by a fan, who must have really had to contemplate the eBay value of the concert score before willingly submitting it back to the country superstar.

The fall happened on Friday, September 5th as the 52-year old plays a series of shows in Chicago stretching out all the way to September 14th as part of his “Garth Experience” World Tour. Of course Garth was too cool to acknowledge the fall, and instead brushed himself off and kept right on with the concert. Garth may have to get used to the new reality of playing concerts with 50,000 video cameras holstered to the belt of his fans. He’ll be fine, but we’ll have to see how well the aging Garth holds up as time goes on. Many of his Chicago dates include two shows a night—a tall order for a freshly unretired performer who’s AARP eligible.

Luke Bryan has seen his own series of stage falls in 2014.