Garth Brooks has been told to hold it just one cotton pickin’ minute when it comes to releasing a new version of his signature super hit “Friends in Low Places.” First announced Thursday, September 3rd, the re-recording to mark the 25th Anniversary of the song includes contributions from Florida Georgia Line, Jason Aldean, Keith Urban, and George Strait. Remaking the country classic with Bro-Country’s finest like Florida Georgia Line and Jason Aldean didn’t sit very well with some country fans, but that’s apparently not the only ones registering a beef with the idea.

The “Friends in Low Places” remake was reportedly going to be part of a re-release of Garth’s blockbuster 1990 album No Fences, also celebrating its 25th Anniversary, and was going to be sold through a currently-unnamed retailer who was guaranteed a low price for one million copies. Garth did a similar deal through McDonald’s in 1994, selling The Garth Brooks Collection with a portion of the sales going to the Ronald McDonald House charity. 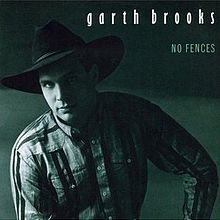 However rights holders to the songs on No Fences balked at the idea of selling the Silver Edition of the CD at a discounted rate. Though Garth himself contributed on some of the songs and owns the masters of the recordings, Universal and Sony ATV said no way Jose to the discounted songwriter royalty rate that needed to be approved to allow the deal to go through.

Royalty rates for songs have been in the news lately, stemming from the move to streaming music spurned by Spotify, Pandora, and other companies. Song publishers have been holding firm on rates to make sure songwriters are not taken advantage of in deals. Universal told Billboard‘s Melinda Newman who broke the news, “While we believe it is inappropriate to comment on any specific negotiation, we are proud to report that UMPG will continue to approach every negotiation with the same guiding principle: Our songwriters come first.”

Garth himself also chimed in, saying it was not his intention to hurt songwriters, and understood why the publishers were taking a stand. “That’s been my whole thing since day one; you have to protect the songwriters.”

The concern is that giving Garth Brooks a discounted rate for songwriting royalties would set a bad precedent for future releases, re-releases, or other music projects. However the irony is that the songwriters for No Fences will miss out financially if no deal on the 25th Anniversary Edition goes through. Why? Because even though the No Fences songwriters would have been paid at a discounted rate for the songs, they would have at least been paid. With a guarantee of one million units sold, it would have meant $45,000 per track being generated for the songwriters. But if the deal doesn’t go through at all, the songwriters will make virtually nothing. No Fences has only sold 4,000 copies in 2015.

“Garth Brooks has done more to generate income from these songs than anybody else,” said Pat Alger to Billboard. Alger was a contributing songwriter on two of No Fences biggest hits: “The Thunder Rolls” and “Unanswered Prayers.”

“On the first several uses, we got paid full rate and then he started coming up with different packages — this may be the sixth or seventh time he’s found a way to re-energize this 25-year-old material. In a day when 50,000 sales really impresses somebody, we’re being guaranteed over a million sales on this. As a songwriter who has watched his income diminish, to give a half rate to someone who’s going to guarantee me a million or a million and a half copies, doesn’t seem like I’m giving up much.”

Nonetheless, the 25th Anniversary edition of No Fences, and the new version of “Friends in Low Places” appear to be in peril unless a deal can be reached between publishers, Garth’s camp, and the so far unnamed retailer. The idea was to release a remixed and remastered package in November to take advantage of holiday sales. But now it could either be delayed, or not come out at all.

Some country fans not looking forward to Florida Georgia Line singing on “Friends in Low Places,” might be happy for the reprieve.