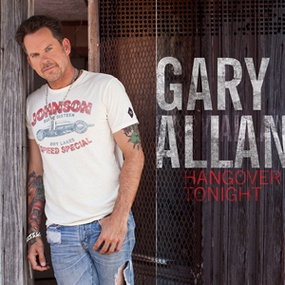 Gary Allan. Gary freaking Allan. I never thought I’d see the day that he would be one to turn to the dark side, but here we are. Yeah, I know, you can point to signs and signifiers throughout his career that illustrated Gary Allan as less than the ideal male country star, but in a greater measure you could point to the songs and moments that made him out to be one of the final remaining good guys in mainstream music that kept it mostly real, and did things his way without compromise. Until now of course.

What a contrast compared to where Gary’s mindset was in September of 2013 when he sat down with Larry King and read mainstream country its rights.

I also feel like we lost our genre,” Gary said in part. “I don’t feel like I make music for a genre anymore, and I did, you know, 15 years ago. But I think since the Clear Channel’s and the Cumulus’s and the big companies bought up all the chains, now it’s about a demographic. You know, so they’ve kind of sliced everything up, feeding it to the public in demographics.”

Gary continued, “You used to be able to turn on the radio and you knew instantly it was the country station just by listening to it, and now you’ve got to leave it there for a second to figure it out…to me, country music is still Monday through Friday, and pop’s about what happens on the weekends.”

Well Gary Allan just released a weekend song if there ever was one. This is why Sam Hunt has been so damaging to country music. Just like Bro-Country did before it, the big success of something preordains that any artist with an upcoming release must follow along until everyone is chasing the same stupid trend. This EDM /R&B business, it’s now reached Gary Allan. Gary freaking Allan.

A writeup in this weeks Billboard Country Update by Tom Roland spells out just what sinister lengths were gone through to bring Gary Allan’s “Hangover Tonight” to life. It’s like the account of constructing a country music Frankenstein: Six songwriters were required, including Chris Stapleton—who despite all his excellent solo work, never ceases to let you down by the unfortunate songwriting gang bangs he ends up being involved in. The track of course wasn’t Gary’s idea, but the idea of producer Greg Droman to attempt to piggy back off the success of Thomas Rhett’s R&B-influenced #1 single “Make Me Wanna.” Gary is quoted as saying, “This is like the fourth or fifth time I’ve had to reinvent myself,” which doesn’t seem necessary for someone simply being original.

Then Gary says, “I remember my daughter walking in and going, ‘I’ve never ever been in the room when you’re writing and there wasn’t instruments everywhere.'” Gary later talks about recording the song in the studio and says, “At one point, I had like over 100 inputs, and we crashed the board a couple of times.” Then the author Tom Roland chimes in with, “The original intent was to use the human tracks exclusively, but as Droman (the producer) started combing through the material during mixing, some of the programmed parts were irresistible.”

This is the sausage making of a modern-day “country” music track, and the results speak for themselves.

This is Gary Allan’s big sellout moment ladies and gentlemen. No pretenses, no qualifiers, just come out and act like you’re into what Sam Hunt and Thomas Rhett are into at the ripe age 47. This is even a bigger sellout moment than Tim McGraw with “Truck Yeah” and Jerrod Niemann with “Drink To That All Night” because you half expected those moves from those knuckleheads. But Gary Allan? The tatted up, “Get Off on the Pain” guy? What, does he have a boat to pay off?

“Hangover Tonight” is terrible. And I don’t know how many videos from these mainstream males I’ve seen—lyric videos or otherwise—that show a line of shot glasses getting filled with whiskey. It’s nearly every damn video. All of them. The foundation of everything in male country music right now is a row of shot glasses.

Once again I ask, where is the CMA in all of this? Where is Billboard‘s chart editors questioning the efficacy of taking R&B songs and charting them in the country genre? Just this week Billboard ran a story about how Zac Brown’s new single “Heavy Is The Head” with Chris Cornell has been designated to the rock chart. Why? Because it is a rock song. Let Gary Allan and “Hangover Tonight” try to hang with the folks over on the R&B/Hip-Hop charts where it belongs, and watch them laugh his cracker ass right off the page. Gary Allan, Thomas Rhett, Sam Hunt, and Jason Aldean’s “Burnin’ It Down” would get their asses handed to them over in the R&B world because it’s not only bad country, it’s worse R&B.

“Hangover Tonight” has no business in country music, and the powers that be need to enact some major scene and quality control in what can fly the country music flag before the entire genre implodes from being completely unable to define its own borders.

Oh, and “you gonna pick up that butt, or do I have to glue it to the end of my shoe and stick it in your big fat pimply a-hole?”