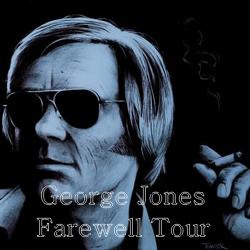 After 50 years of service to country music, the 80-year-old George Jones has just announced that in 2013, he will be going on his final tour. “The Grand Tour” as it is being billed will include 60 dates. At this time, no dates or cities have been announced. “The Grand Tour” was also an album and song Jones released in 1974.

“It is tough to stop doing what I love, but the time has come,” Jones said in a press release, citing a desire to spend more time with his wife, children, and grandchildren.

Earlier this year George Jones battled a respiratory infection that lasted for weeks. He spent a week in the hospital in early April 2012, and as he was recovering at his home in Franklin, TN, doctors mandated he take additional time off and canceling numerous shows. Jones’s recovery was slow, but he finally resumed touring this year. He’s also been involved in a battle with his daughter Georgette Jones, and has had difficulty selling his Franklin, TN estate.

As much of a fan of George Jones as I am and it pains me to see him announce a farewell tour, it also seems appropriate considering his health struggles and personal issues. The man has given so much to country music and touring is such a burden on a performer’s family life and health that it would only make sense that George Jones take some time for himself here in his golden years. I feel confident George Jones will not disappear after the 2013 tour, but will be around longer as a country music elder statesman by pacing himself and finding the appropriate role for music in his life as he grows older.